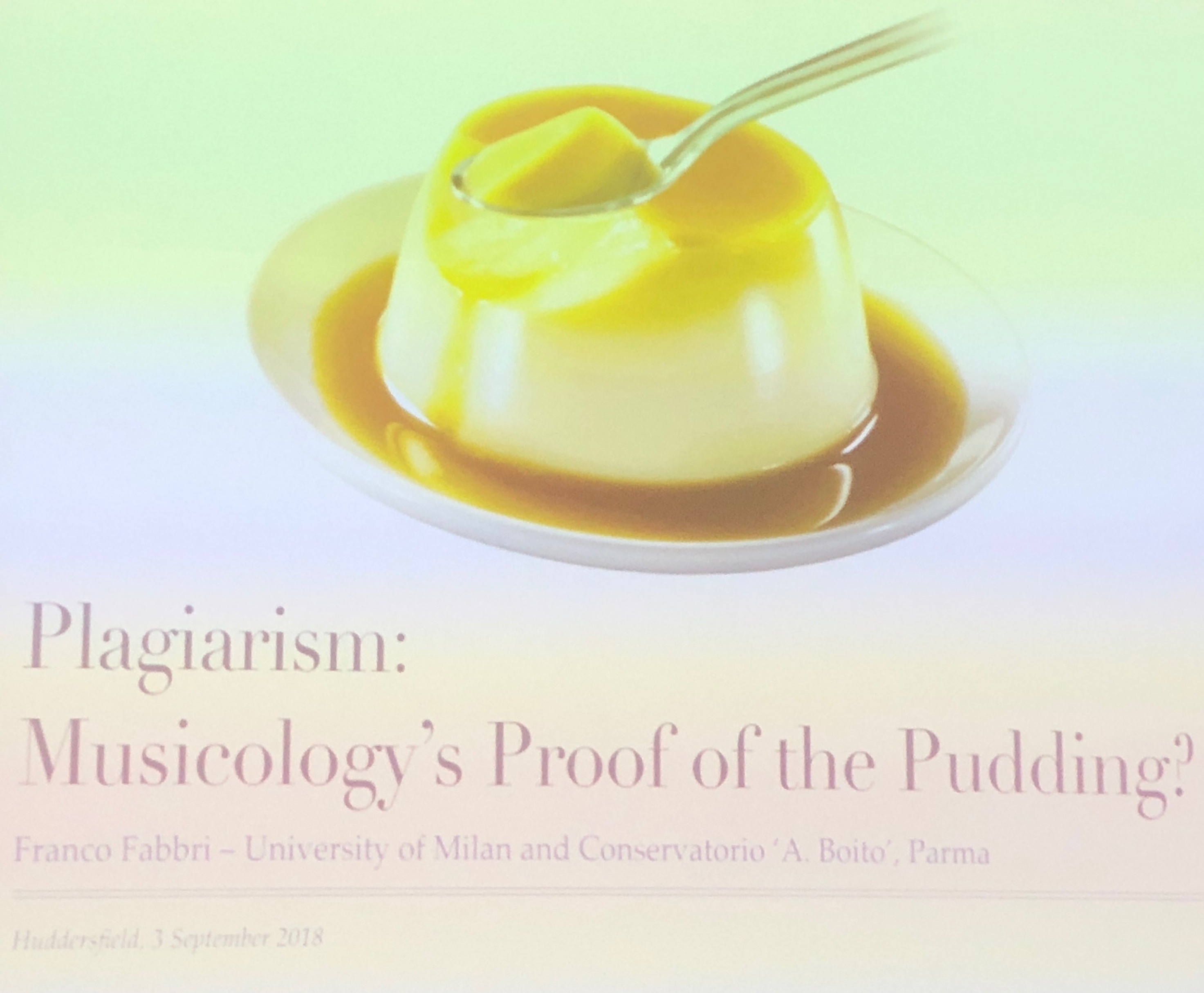 Our opening keynote for the conference is the much-loved Franco Fabbri, a much-celebrated musician, educator and musicologist. I was particularly interested to hear this one, because Franco is talking about Forensic Musicology, and with a particular focus on Italian case law.

Here’s my live-blog of his hour-long talk, with YouTube examples where I could find them:

Plagiarism: Musicology’s Proof of the Pudding

Franco opens with a question: what are the purposes of musicology? He outlines some of the known educational definitions, and the way musicology aims to comment on music from a social or historical viewpoint. What, though, are the practical uses of musicology – the people who contribute to the economic life of the popular music industry? Do ‘forensic musicologists’ object to the label? Franco suggests that ‘forensic musicology’ is a misnomer – there is no ‘forensic physics’, for example. But the definition of FM is known – and Franco argues that existing musicological techniques are used in plagiarism/copyright disputes, although some methods are favoured more than others, not least because the majority of music copyright litigation pertains to popular, as opposed to classical musics. He now comes to plagiarism, and its relationship with the concept of copyright. I can’t be thought of, he says, outside of the historical context of the 18th and 19th centuries [implicitly in Europe] – that is, the rise of the idea of individual authorship in music and art generally. He discusses the differentiation between the creator (songwriter) and ‘bearer’ of the song (performer). For many years, particularly pre-18th century, plagiarism was cheerfully common. Copying, adaptation and recreation were common creative practice in Bach’s time. Plagiarism, then, is an ‘incorrect’ practice only in a social/legal context in which it is so defined. Franco mentions Bloom’s Anxiety of Influence, in which copying was described as a communication channel between the influencer and the influenced. There have been methods of meta-copying for years – for example Elvis Costello’s practice of writing songs to the structural template of Motown tunes. What has changed in the 20thC, he suggests, is that musicologists are being brought in to detect unconcealed imitation, or ‘forgery’.

Fur Elise (1867) was, he says, was arguably not by Beethoven, being based on notes he took from others’ work. Plagiarism, in Anglophone coutnries, is defined partly by the ‘threshold’ of similarity, i.e. the amount that is taken. He describes a ‘common opinion’ (that the threshold is 8 bars, or 4 bars) [JB note – I was not aware of this and would like to see case law sources of the common-ness of such bar-counts – not sure I agree with it]. He notes (and I agree) that there has been no consistent attempt to define such a threshold [JB note – I presented a paper discussing the lack of thresholds at IASPM 2017 in Germany]. He now cites some [Italian?] definitions of plagiarism, including music copyright case law, and describes the tension between lay listeners and ‘experts’ in assisting courts in judging plagiarism cases. One issue that defendants may bring up is that the earlier work was not in itself original, and we lack criteria for defining where such originality is codified – i.e. in the sound recording or in the transcription. [JB comment – This nuance was very important in the Blurred Lines case… leading us to the inevitable meta-question: what do we mean by ‘song’?]. Spotting musical similarity and crying plagiarism has been a popular sport for many decades, and is even more common now that it is so easy to do this (on YouTube etc). Indeed, this adds an interesting social media dynamic – musicologists occasionally use the number of ‘likes’ of a ‘cry plagiarism’ video as quasi-democratic evidence of copying [he implies, and I agree, that this is a methodologically suspect practice!]. The story, Franco says, often goes something like this: an unknown songwriter submits an audio demo to (e.g.) a song contest, and sometime later, a better-known artist has a hit that sounds similar. The plaintiff cries plagiarism, and musicologists are hired, who allege that the minor similarities between these works are evidence not only of copying, but also of an attempt to conceal the copying. It is possible, though, that such deviations are in fact evidence of independent creation – i.e. no copying has taken place. The challenge of the ‘threshold’ is so much greater if the respective works come from different genres. When there is a greater cultural distance between the source and the alleged copy, perhaps potential plagiarists are emboldened.

He now discusses cryptomnesia, or unintentional similarity (JB note – I’ve blogged and written about this at various times). When plagiarism is alleged, experts are hired to write a letter on behalf of the clients, describing their case in musically specific terms. At this early stage, the case is ‘liquid’, and economic factors are in play – how expensive would it be to hire a musicologist? Would the risk outweigh the cost, or vice versa.

Franco plays the audio (and points out to the non Italian speakers in the audience that the titles have the same meaning). After the initial opening salvos in cases like this, consultants are hired by the courts (and Franco focuses on Italian industry practice). Here, he points out, the musicologists are often hired from classical composition departments of conservatoires. These institutions, he suggests, embody the cultural values of 19th century musicology – notably, that the musical work is defined as the score.

One of the most important Italian case involved an indigenous artist who sued Michael Jackson. The musicologist’s dismissive argument was that “both songs were devoid of originality” [laughter from the audience… either at the musicologist’s prejudice, or at the implicit crit of Jackson’s work]. In this case, as many others, there was a search for antecedents to find ‘prior works’ that demonstrate the alleged lack of originality in the earlier work. Where notes are formulaic or predictable, Jackson’s musicologists argued, the similarity is not due to plagiarism but instead as a result of the genre inevitability of certain note chains being genre-based. Now we hear the two songs from the case – Jackson’s ‘Will You Be There’ and Al Bano’s ‘I Cigni di Balakà.

One of the antecedents found by Jackson’s lawyers was ‘Bless You’ (the Ink Spots, 1939; another was “Darlin’” (Frankie Miller, 1978) – and indeed [IMHO] the similarity supports their case [to dismiss], that these are generic melodic gestures, and therefore not protected by copyright.

Franco suggests that there is one element that the case perhaps should have considered an additional similarity between the plaintiff’s and defendant’s songs – and he plays the back to back examples of WYBT and ICDB so we can hear the [24-quantise shuffle] groove. [JB comment – his point, I infer, supports my own view that some forensic musicology and/or case law focuses unfairly on pitch – that which is codified in the score – which as popular musicology often points out is only a pale imitation of the audio object that forms the creative artefact of value in the recording industry. Or put another way, melodic transcriptions are bunk.

Conventional musicologists, Franco reminds us, grab transcriptions (such as those deposited with the Italian copyright office) and jump to the false (‘classical’) conclusion that the score is the musical work, rather than just a reduced-bandwidth transcription of it. The problem that conventional musicology has in assessing popular music originality is that, in common-practice pitch-based terms, ‘everything is already in Bach’. We conclude with another Italian plagiarism case ‘Sono già solo’ (Modà, 2009) and ‘Anima nera’ (Edea, 2009) (comparison).

In this cases, the classical musicologist consultant concluded that neither work was original because they were both based on Beethoven’s Fur Elise! By this logic, he says, there is always that chance that almost any melodic similarity can be found if you scour the classical canon in enough detail. And of course, because these notes can occur anywhere in the bar, taking them out of context is a spurious methodology.

[JB comment – I agree with most of Franco’s points here, and I infer that he is advocated for a 360° approach to musical comparison, bringing together contextual similarities beyond pitch – rhythmic placement, harmonic context, lyric context, and of course recording similarity. We’re all trying to solve the same problem here, and he has made some really helpful points regarding the methodological challenges of the status quo in forensic musicology].