The case has now been resolved, and the jury found in the Gayes’ favour, despite the copying not being exact and the musical elements dissimilar, as my original February 2014 post (below) argues. In an interview with the Hollywood Reporter, Richard Busch, the Gaye family lawyer, describes how the Thicke side’s hubris and inconsistency contributed to the jury verdict going against them – but insists that the case was successful because of the characteristics of the music itself. For those who have said that this sets a dangerous precedent for creators (including me – see this MTV news interview), this may be so in terms of discouraging musical homage in arrangements. But in (US) legal terms, a jury ruling is different from a court ruling, so each case is judged on its merits and on the specific evidence presented. Therefore this settlement does not represent ‘case law’ (as attorney Brian D Caplan points out in the same MTV feature) but it has certainly made some creators rather uncertain about their future songwriting and producing practices… [JB]

There’s been a lot of media interest in the recently-resolved dispute over the alleged similarity between Robin Thicke’s ‘Blurred Lines’ (2013) and Marvin Gaye’s ‘Got To Give It Up’ (1977). The press release that started it was written by the Gaye family’s representatives King and Ballow, so the section I quote below is obviously accusatory, and the ‘evidence’ it cites appears to be based on lay listener opinion:

The “Blurred Lines” trio rushed to file their case soon after their song began attracting overwhelming attention from critics and fans about the substantial similarities that surpass the realm of coincidence to “Got to Give it Up.”  On August 8, 2013 Rob Hoerburger in the New York Times  wrote “But what I keep coming back to is the song’s choice DNA… And that bass line came right from Marvin Gaye’s No. 1 hit from the summer of ’77, ‘Got to Give It Up’.” In the August 23, 2013 issue of Rolling Stone Magazine, Contributor David Ritz wrote, “When I first heard Robin Thicke’s ‘Blurred Lines,’ my reaction was the same as millions of other R&B fans: Hey, that’s Marvin Gaye’s “Got to Give It Up.”  Thicke and company not only copped [sic] Gaye’s distinct bass line, but the defining funk of the cowbell accents. I wasn’t entirely surprised, since some years earlier Thicke’s ‘Love After War’ was a virtual lift of Marvin’s ‘After the Dance’ …”  A quick review of the internet reveals these comments are far from alone in this respect.

The allegations, then, were that Thicke (with co-writers Pharrell Williams and Cliff Harris Jr)

Here’s a Spotify playlist and a YouTube comparison – listen for yourself.
[spotify id=”spotify:user:joebennettbath:playlist:5FGLqxSR6jj8PlJHUlp9MX” width=”300″ height=”300″ /]

Here are the facts:

The two basslines are transcribed below. I’ve transposed ‘Blurred Lines’ into the same key as ‘Got To Give It Up’ here for ease of comparison, and notated them in A minor (no sharps or flats) partly for simplicity and partly because both basslines are built on notes of the home key’s minor pentatonic scale. This ‘normalisation’ is intended to highlight any similarities that might otherwise be disguised by transcribing ‘Blurred Lines’ in the original key – that is, I’m giving Gaye’s side the best possible chance of proving their assertion that the bassline has been copied.

Got To Give It Up (Marvin Gaye) – transcribed from bar 5 [0:14]. This bassline employs substantial rhythmic variations throughout the song.

Blurred Lines (Robin Thicke). This 8-bar bass line is looped throughout the song.

When compared note for note like this, the dissimilarity is obvious. These basslines use different notes, rhythms and phrasing from each other. They’re even taken from different musical scales. Thicke’s bass notes are all taken from the mixolydian mode; the Gaye bassline is based around the pentatonic minor scale.

Now let’s look at that cowbell. Gaye uses the following cowbell riff, which plays pretty consistently through the track.

Got To Give It Up (Marvin Gaye) – 2-bar cowbell loop

Thicke’s song has more cowbell. I’ve notated both parts below. The upper one (panned right in the mix) plays a specific pattern, with a different rhythm from the Gaye song; the lower one (panned left) plays an off-beat, like a reggae ‘skank guitar’ groove. The lower one drops in and out periodically during the track.

Thicke’s cowbells (actually a cowbell and another percussion instrument that sounds to me more like an electronic clave) syncopate on the 16th notes (a semiquaver groove); Gaye’s song is very clearly an 8 groove. The only similarity is that each riff plays the first three 8th notes (quavers) of the bar.

So, those are the facts, at least regarding compositional note choices. Now let’s get back to the first accusation in the press release:

Thicke and company not only [copied] Gaye’s distinct bass line…

If this is true, and Thicke’s team  actually ‘copied the bass line’, then they  changed most of the pitches, moved lots of notes around, and deleted some notes. Or put another way, they wrote an original bassline.

[Thicke has copied] the defining funk of the cowbell accents.

What exactly is ‘the defining funk’? Most of the accents in ‘Blurred Lines’ do not appear on the same beats of the bar as in the Gaye song, which by any reasonable rhythmic definition makes them different accents. Or put another way, they are an original compositional idea.

So if the note-to-note musical dissimilarities are so obvious, why did this press release bother to accuse Thicke et al of plagiarism? Clearly Gaye’s family thought they had a case. I think the reason is that the tracks do sound similar. Indeed, I don’t doubt Thicke’s production team deliberately used ‘Got To Give It Up’ as a style template to create the sound and feel of ‘Blurred Lines’. The instrumentation and tempos are pretty much the same, and there are many notable arrangement decisions in the Gaye song (for example, playing the bassline on an electric piano) that occur  in ‘Blurred Lines’. In fact, Thicke himself stated publicly in a GQ interview that his team wrote ‘Blurred Lines’ using ‘Got To Give It Up’ as inspiration:

Pharrell and I were in the studio and I told him that one of my favorite songs of all time was Marvin Gaye’s “Got to Give It Up.” I was like, “Damn, we should make something like that, something with that groove.” Then he started playing a little something and we literally wrote the song in about a half hour and recorded it. The whole thing was done in a couple hours… 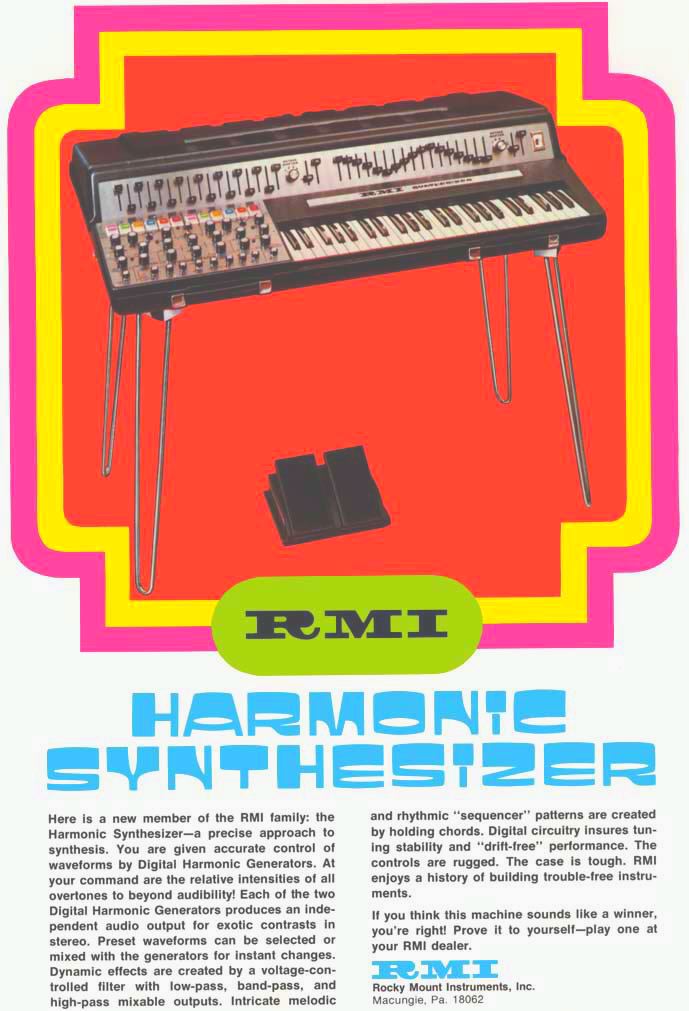 The RMI harmonic synthesiser, on which Marvin Gaye played the bassline for ‘Got To Give It Up.’

So to make a successful accusation of copyright infringement, Gaye’s side would have had to argue that the production ‘feel’ (or as the King and Ballow press release puts it, ‘choice DNA’) of ‘Got To Give It Up’ could attract copyright. Any legal action would probably have required the court (with the help of musicologists) to define exactly how this ‘choice DNA’ manifested itself in the recording, in order to discuss similarities. The act of putting an electric piano together with a cowbell and a 120BPM disco beat would need to have been judged a creative act in itself, making instrumentation and possibly even genre into protectable Intellectual Property. Which would have had massive implications for future creators of music.

I’m off now. My Delorean is heading to 1885, which is when I invented the snare drum backbeat.