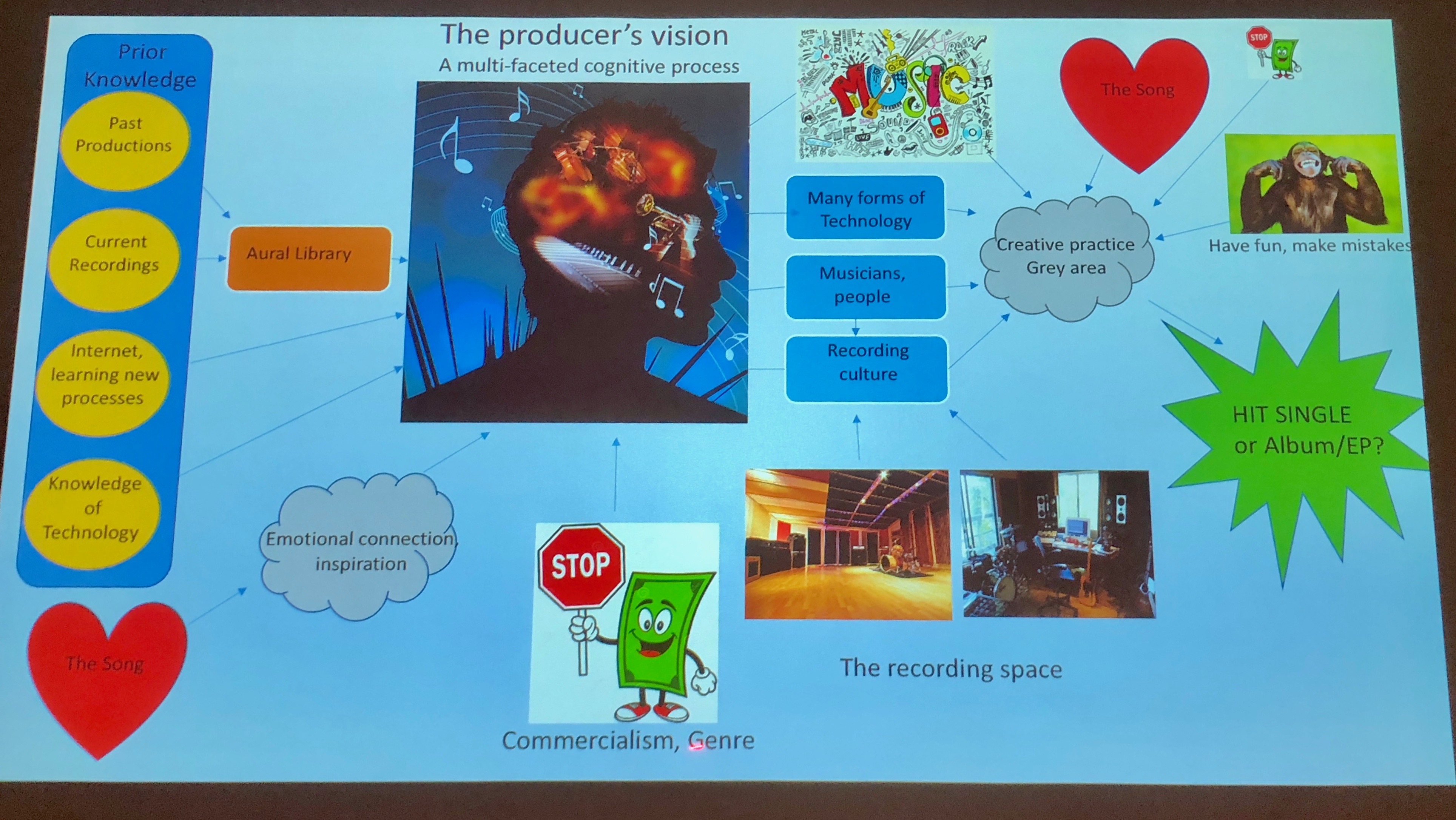 Abstract: Research into popular music record production and its associated creative practice has highlighted that a song’s production is often influenced by a multitude of stimuli and these can be musically, sonically and socio-culturally diverse. Technology’s influence on musical aesthetics is also at the forefront of scholarly investigations because the democratization of recording technology suggests that the musical spaces producers operate in have changed. Artistic direction however, is still the producer’s responsibility and the current landscape for record production is filled with a multitude of creative practice options that shape the recording aesthetic. These can include live or overdubbed performances and electronic programming versus acoustic instrumentation and when combined with technological choices these decisions ultimately frame the creative stages of pre-production, recording, and mixing. So how does the producer ensure a production process that engages appropriate influences, and subsequently manifests a suitable musical result?
This paper theorizes that the producer’s vision is the constant underpinning of the production rationale and therefore this subsequently designs the recording process and affects musical and sonic aesthetics. It is here that the producer uses multi-modal perception to target genre related outcomes of musicality and the sonic palate, and nurture the capturing of appropriate performances. However the paper argues that this cognitive vision is an individualised trait that is inspired by a ‘field of knowledge’ from which producers innovate. This paper reports on a qualitative investigation into the producer’s vision via a survey of five producers whose experience range from national success in Australia to international acclaim. The paper demonstrates how the data analysis unpacks the discourse surrounding the producer’s vision and is supported by research from the fields of creativity, musicology and popular music production.

Brendan begins by siting his personal research within the producer’s ‘vision’, and he opens with a clip from the movie Begin Again, which describes the producer’s thoughts as he hears a low-key live performance and mentally adds instruments.
https://www.youtube.com/watch?v=227m6uLCRtU
Where does ‘inspiration’ come from? Brendan describes the famous SNL producer character who has “gotta have more cowbell”.
These two, though, are examples of the traditional producer. Today we have the ‘bedroom producer’ and the ‘songwriter producer’, many of whom have not experienced the pre-digital creative process, and who cheerfully blur songwriting, recording, mixing and production
Brendan’s research includes interviews with 9 producers of various types, combined with Likert scale data created through producer questionnaires about creative vision, songwriting adaptation, and artists’ creative roles. The data are different between pre-digital and post-digital producers. New and early-career producers are influenced by songwriting and genre more so than the experienced professionals. Older producers are influenced by past recordings; newer producers choose technologies according to individual projects’ needs.
As producers become more experience they rely more on their own vision. New producers rely more heavily on genre to influence their decision. The data shows that the producer’s vision is an individualized trait, developed through an ‘aural library’ acquired over many years.
In addition to the Likert scale work, Brendon also asked open questions to generate qualitative data. Thematic analysis suggests a clear connection to the artist’s song as the core inspiration; in the creative hierarchy, this is higher than the producers’ own tastes and aural library.
[JB comment – Brendan briefly mentions my own paper from the last IASPM conference, where in questioning we discussed the extent to which producers generate creative artefacts that may be protected by copyright.]
Technologies influence creative practice and play a part in blurring boundaries. One respondent was Jared Adlam, who worked on one project where all the songs were at similar tempos (around 141BPM) and were all in the same capo-G guitar position key. He took several steps to make the songs more different, reducing the BPM, adding instruments, vocals and compression.
Changes in consumption habits (from albums to single tracks) has created a more per-song-driven approach to production, but producers remain spontaneous and creative despite these market demand. One respondent liked to use serendipitous or random ‘accidents’ – such as moving a vocal part to an unexpected place in the bar – to enable unexpected outcomes in a track and spark creativity.
Brendan finishes with a summary slide, combining workflow, creative processes, technologies and market context: