No, the other Washington. 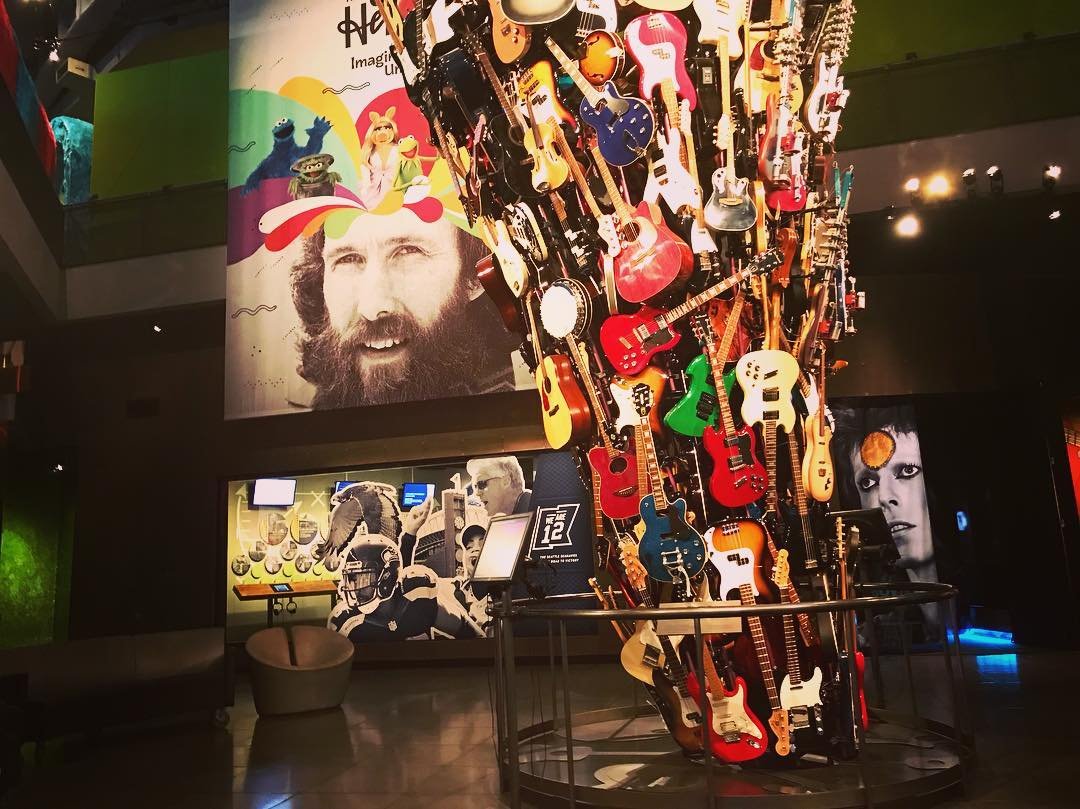 Mopop Seattle. This exhibit is a very large guitar stand, which is arguably not stable enough for touring.

I’m in Seattle at the New Music Ecosystem conference, organised by the University of Washington Law School. It’s a gathering of music and law professionals, discussing the future of creators’ compensation, tech/music innovation, and copyright reform. [Grammar folks – I’ve now been in the USA for long enough, and had Oxford commas inserted into my copy so many times, that I have decided to give in and just use them from hereon].

My contact here is the conference organiser, the remarkable Sean O’Connor. He has had two careers – as a pro guitarist and songwriter, and (now) as a copyright lawyer and academic. For those who read this blog for the music/songs and guitar stuff, you may want to check out Sean’s academic paper about the development of electric guitar pickup patents in the mid 20thC.
On the first day I was part of a panel discussing the question of ‘who is the author’ – that is, how should credits and copyrights be distributed, with two extraordinary co-panelists: music producer and film-maker Count, and music copyright attorney Richard Busch, who is known for his influential work on the Blurred Lines copyright case.
The single biggest item of discussion throughout the day was the Music Modernization Act, an enormously significant congressional act that has, at the time of writing, cleared the House and is headed for the Senate – interestingly, in a unanimous vote. Many have commented that at a time when US Congress is more divided than ever, it is notable that this is successful bipartisan legislation. Music unites us all, perhaps…
It’s Saturday morning and I write this from a lovely auditorium in Seattle’s Museum of Pop Culture. Our speakers are Steve Worth, Amazon; Lita Rosario, WYZ Girl; Lateef Mtima, Howard University School of Law/IIPSJ; Kristelia Garcia, University of Colorado Law; and Kevin Erickson, Future of Music Coalition.
Steve Worth (Amazon) opens the discussion, describing trends in music consumption in the home, and outlining how Alexa/Echo and Prime membership deliver on-demand music to users according to their needs. ‘Alexa, play music’ is the most commonly-used voice command, he tells us. The ‘laid back’ music user – people who listen casually to the radio and don’t necessarily search out specific songs or make their own playlists – is a huge market, and is being heavily targeted by Amazon and others.
Steve then goes deep into a description of international mobile listening and music streaming trends, noting differences between countries according to culture, services, mobile penetration and bandwidth. He predicts that after the home and mobile, the third frontier for streaming music will be the car. He notes usability and quality issues with Bluetooth and SiriusXM (etc). 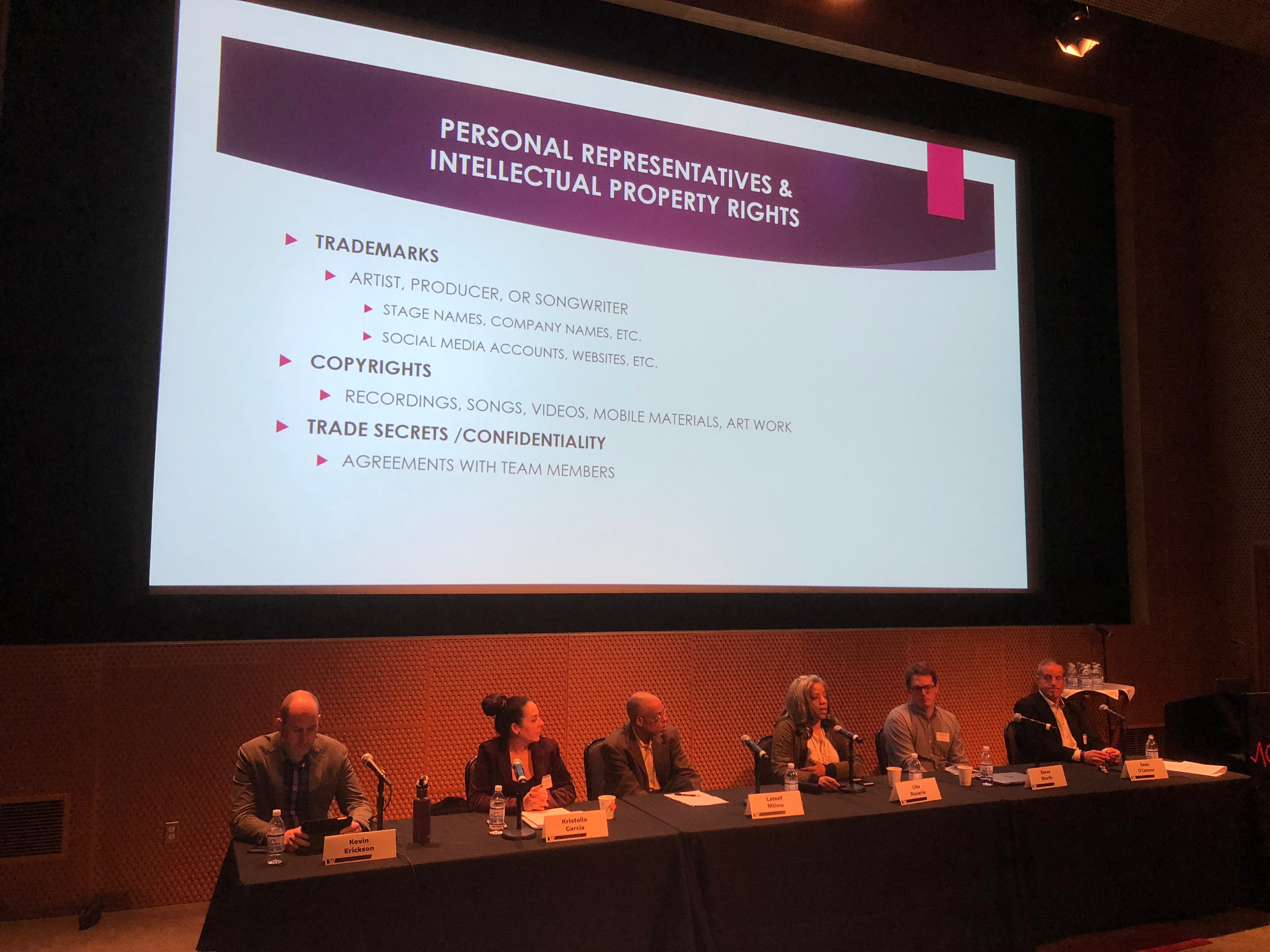 Next we hear from Lita Rosario, who provides an overview of the areas in which an artist’s team intersects with IP and law. She discusses the long pop tradition of a ‘put-together group’ (citing the Spice Girls as an example), and notes that groups of this nature do not necessarily own IP, pointing out how any lack of clarity regarding these issues can lead to later conflict. Lita talks about the industry standard today regarding publishing ownership, and observes that the dark days (where 100% of an artist’s publishing was assigned to a manager or other third party) are thankfully behind us.
We see an overview of management contracts (see also the recent post of Tonya Butler’s artists contract session), including compensation, term, rights etc. Jay-Z’s Roc Nation is a recent example of artists setting up companies to manage/advocate for other artists, e.g. Maria Carey. This is followed by a quick-fire list of others on the periphery of the core team –  booking agents, accountants etc – followed by a longer discussion of 360 deals, which represent, Lita says, a merging of the old record label and manager roles.
Lita covers a lot more and I don’t catch it all here, but the room was interested in the description of current streaming income – e.g. Spotify is currently paying $0.00783 cents per stream.

Our next speaker, Lateef Mtima, brings the conversation to specific legislation, and describes the strides that have been made in artists’ rights. How should we deal with legacy artists? He argues – powerfully – that mid-20thC recording industry exploitation of artists was a product of the Jim Crowe era. He is one of many speakers at the conference to discuss historical US artist exploitation in the context of race.
He doesn’t love everything about the Classics Act but sees it as a compromise that helps legacy artists to some extent. Lateef ends by stating his strong belief that artists need to advocate (for themselves, to digital platforms) collectively – and this means being organised. As labels disappear and artists take a DIY approach, digital platforms will fill the vaccum. Can artists work with lawyers and digital providers for the collective good? He proposes an artists’ licensing collective.

Kristelia Garcia presents some of her music industry research – anonymised case studies of hip-hop, R&B, alt-rock and alt-pop artists. Most are mid-tier – first or second album level – and one is top tier. As we move up the tiers of career progression, we see the balance between label advance, recoupement through royalties and the amount of money made from touring, endorsement and publishing royalties. For the alt-rock band example, the artist is making 80% of their income through touring (Kristelia describes them as ‘very tired’!).
We look at an ‘ascendent’ top-tier touring solo R&B solo artist, whose income breaks down as follows;  recording 10%, publishing 30%, touring 30%, and endorsements 30%. The final example is a top solo R&B artist, whose income splits as follows: recording 20%, pubishing 20%, touring 60% (arena deals in a touring year). In alternating non-touring years, touring income is replaced by endorsements.
Kristina’s research leads to some big questions, which are summarised really well in her final slide – see photo below: 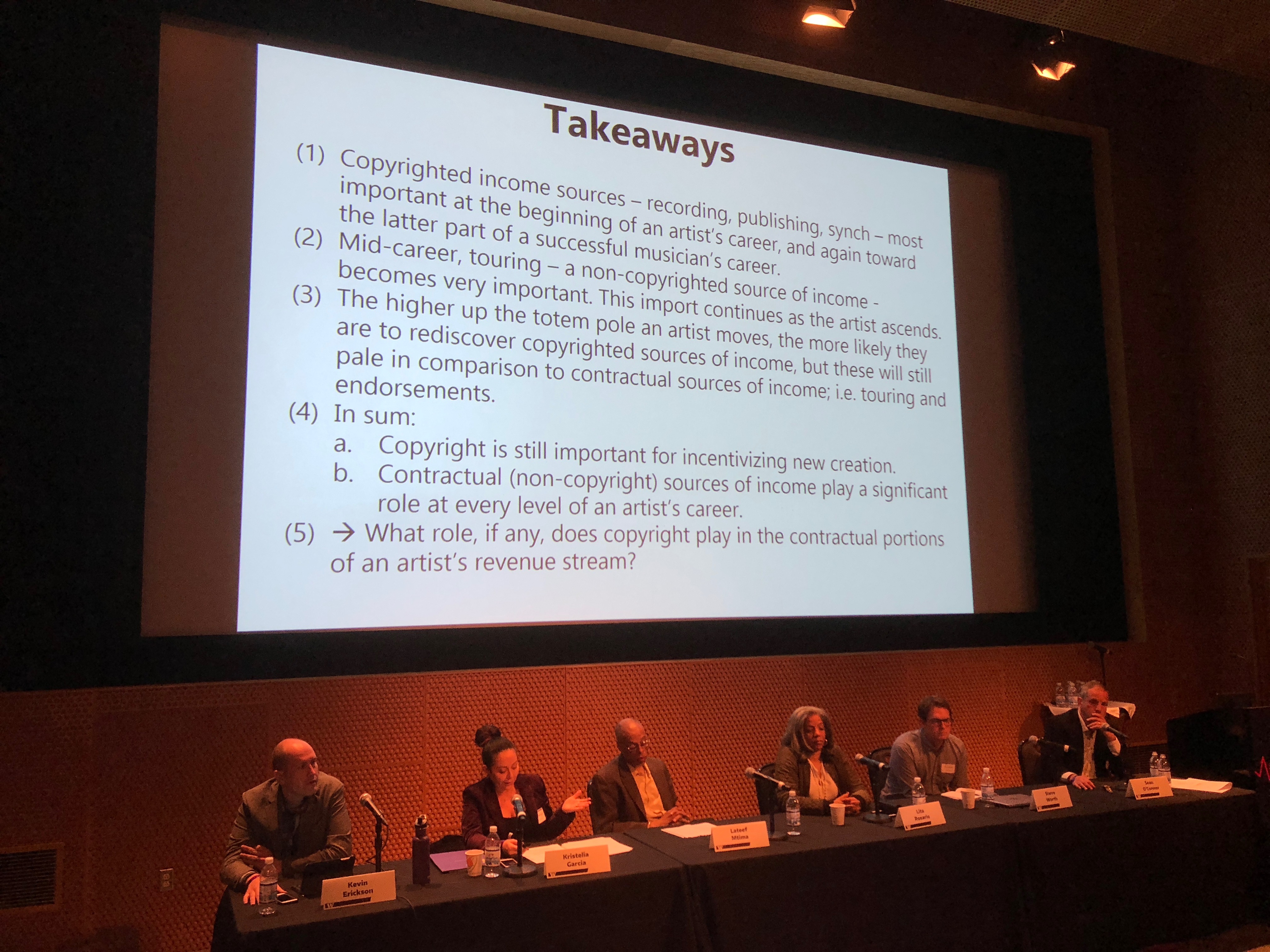 The final speaker for this session is Kevin Erickson of futureofmusic.org. He intends to talk about power – why do musicians have historically had such little power when negotiating with large organisations, and what can be done about it?
Kevin discusses the disadvantages to any small scale operator in the music industry; there may be change to industrial models, but large companies still hold proportionally large power; he cites contemporary vinyl pressing as an example, and talks about other monopolies, including ISPs and the now ‘big three’ major labels and the networks they control. Why, he asks, didn’t US regulators do anything to prevent these monopolies from rising? His own answer is that antitrust legislation is too short-term in its reasoning.
But big tech companies are now far bigger than major labels – so we have to talk about Amazon, Google, Facebook and Apple in the context of antitrust policy making. These companies are incentivised to pursue predatory pricing in the quest to expand user base and please shareholders. In this context, music can be treated as a loss leader. This business practice can unintentionally amplify the winner-takes-all music industry approach.
The key word here is ‘unintentional’ – Kevin does not believe that big tech wants to diminish the music industry or cause other economic harms to less powerful groups. When the product is free to the consumer this creates difficulties for antitrust arguments. Apple won’t allow bandcamp sales through its App Store because the Store takes 30% – even though many independent musicians favour bandcamp as a sales platform.
For artists and people who represent them, we are often told that they need ‘entrepreneurial skills’. But he says these skills are inadequate in a hyper-corporate world, monopoly capitalism will need at least some type of democratic federal regulation. Kevin ends with some good news; he is happy to say that lawmakers are not unaware of the potential negative impact of too-light regulation of monopoly tech; this conversation is starting in Washington.