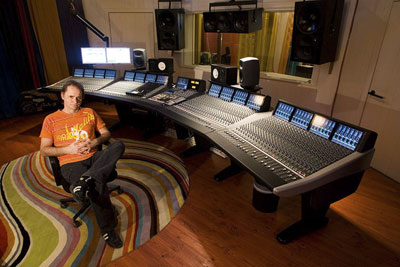 For the first time ever, this ARP opens with a rather lovely piano recital by our hosts, which serves as a (surprisingly romantic) introduction to our keynote speaker, Swedish producer Bernard Löhr (discog).
Bernard greets us by noting that he has two great interests – recording music, and cars. He promises to focus on music today, and talk about cars only if time allows!
Bernard describes his personal journey into ‘sound on sound’, including his enthusiasm for playing with early ReVox reel to reel tape. We hear a demo of his from this era, which brings smiles from the assembled audience, being clearly filled with idiomatic sounds of the early 70s – I can hear something that sounds like an early polysynth strings sound and a lead line from a MiniMoog. This leads us into a description of early tape-based analogue mixing processes, including marked-up faders, four-bars-at-a-time mix workflows, endless tape splicing. Martin describes problems in the 80s relating to hardware (tape machine) compatibility, and gives us an example of a reversed reverb rising into a chorus, a process which he notes takes seconds on a modern DAW but took him and his team many hours at the time. [the audience of ARP audiophiles notices and appreciates the moment, and laughs supportively at the sheer workload involved in such a tiny mix-buried effect]. He talks about the commercial calculation of required for audio effects, giving the example of a ‘tape stop’ effect, describing all the mix/bounce processes required to add such an effect to a record, and a record company exec asking “so if we hire a studio to let you have this expensive effect… will that make a bigger hit?”.
We now move towards (presumably) the late 80s and Bernard describes the tech challenges of synching two 24 track tape machines, noting the need for a 20sec pre-roll in order for the machines to synch in time for a drop in. He describes a technique he pioneered in LA, which featured a single master sync tape and then many slave tapes during tracking, which enabled true 46 channel mixing. The expense of running more than one 24 track machine meant that it was sometimes necessary to have one machine per studio and then sync between studios. He then describes how ‘copy and paste’ (e.g. of backing vocals between choruses) was [laboriously] achieved using tape copying/bouncing between machines – a process that takes seconds on a DAW. We hear one of Bernard’s recordings from this period – ‘Love Like A Mountain’ by Swedish band Visitors – he was going for a radio-friendly ‘American Sound’ at the time, and this recording (from around 1986) represented a sound that was technically unachievable before then.

Returning to issues of sync, Bernard now describes using a LINN 9000 as a master clock, and how MIDI sync issues were resolved by putting some lagging audio through a digital delay. A kick drum would be recorded on audio tape, with the bassline provided by a MIDI sequencer. He would use a tape measure to figure out how many centimetres ‘out’ the audio kick drum was with the MIDI bassline, and then to calculate the number of milliseconds’ delay, in order to sync bass and drums.
Bernard was an early adopter of 32-channel digital multitrack, and he talks about the ‘hard’ sound of these early digital technologies. We hear Visitors again – the song All Of Your Attention, which was recorded in this way.

During this mid 80s period the first DAWs were becoming available, and he describes an early system that provided 2 channel recording and 8 channel playback, but even with this technology there was still a timecode master tape required for some of the recordings they wanted to do. He recalls marveling at how easy this workflow was, compared to what he’d been doing previously. At this time he and his team were inspired by Owner of a Lonely Heart, and wanted to emulate the idea of using and looping the single ‘best’ bar of drums. To achieve clear consistent looping with these technologies took three days and a lot of hard maths, he recalls.
In 1987 Bernard started rebuilding the famous POLAR, the old ABBA studios, which he upgraded at that time with an SSL console and hybrid analogue/digital tape systems. One early project was the recording of the Andersson/Ulvaeus musical ‘Chess’ [JB note – the first cast recording I ever bought!]. We hear a recording from the early 1990s of a song by Benny & Björn called ‘Where the Whales Have Ceased to Sing’ by Swedish artist Josefin Nilsson. Bernard notes that Benny had the habit of improvising (unrecorded) along with the studio playback on his Synclavier, and recalls returning to the studio one morning only to find that Benny had changed the verse keboard arrangements overnight. Here’s the example – you can hear Benny’s dramatic changes towards the end verse 2.
https://www.youtube.com/watch?v=EJJdj_stVVI
Bernard now talks about orchestral recording, noting Benny’s preference for multi-instrument micing to afford better mix control. He notes the physics problems of delay and phase relating to recording technologies and mic distance, and describes some of the maths that was necessary to keep machines in sync, allowing the close mics to be perfectly in sync with the ambient stereo pair for the full orchestra. It took a week! Today, he notes ruefully, you just move the stereo track in Pro Tools. It takes 10 seconds, he sighs.
Our next audio example is from 2010 – one of Bernard’s orchestral recordings of another Benny Andersson composition – “Kristina” album overture, performed at Carnegie Hall.
Bernard ends with a list of all the hugely convenient tools, reeling off Izotope, Melodyne and many others. For the last month he has been at London’s AIR studios working on a new Mamma Mia musical, and he loves to work in surround sound, and with so many actors and singers.
Finally, as promised, he talks about cars! He worked on a car simulator project for computer games soundtracks, and notes that game designers have used his recordings of car engines to make the driving more realistic. He describes actually driving himself to get proper lap by lap recordings of car engines at specific engine speeds.
These techniques are not only applicable to cars. He provided most of the audio recordings of warplanes for the movie Dunkirk, for example, and has since got into recording tanks, sports activities and other active real-world sounds for soundtrack and game work.

[JB comment]
Bernard’s career represents a fascinating journey through music production history, starting in pop and arriving today in multimedia, games and movies, and to hear all of this world-class work described with characteristically self-effacing Swedish understatement makes it all the more impressive.