This article originally appeared in Total Guitar magazine issue 218, September 2011. Reproduced by permission. Words: Joe Bennett. Illustration: Christian Ward. Click the image on the right to download a pdf of the article. 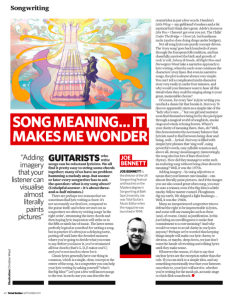 Guitarists who write songs can be reluctant lyricists. We all find it pretty easy to string some chords together; many of us have no problem humming a melody atop. But sooner or later every songwriter has to ask the question – what is my song about? (unhelpful answer – it’s about three-and-a–half minutes).
There are perhaps two reasons that we sometimes find lyric-writing a chore. Firstly, it’s not necessarily our first love, compared to the guitar itself – if we’d wanted to be poets we’d be hanging out in French cafés smoking cheroots and reading Sartre, right? Secondly, when we start out as songwriters we often try writing songs ‘in the right order’, strumming the intro chords and then hoping lyric inspiration will strike us in the 5th or 9th bar of music. This seems perfectly logical as a method for writing a song, but in practice it is often just a delaying tactic, putting off until later the dreaded moment where you’re going to decide what you want to say. Before you know it, you’ve strummed all four chords (that’s G, D, E minor and C) and you’ve not much to show for it.
Classic lyrics generally have one thing in common, which is a single, clear, concept at the centre of the song. As a songwriter you can help your lyric-writing by asking yourself “what’s the Big Idea?”. Let’s put a few well-loved guitar classics to the test; in each case you can describe the central idea in just a few words. Hendrix’s Little Wing = my girlfriend’s bonkers and a bit mystical but I think she’s great. Adele’s Someone Like You = I haven’t got over you yet. The Chilis’ Under The Bridge = I love LA, but loneliness sucks (and so does doing drugs under bridges). 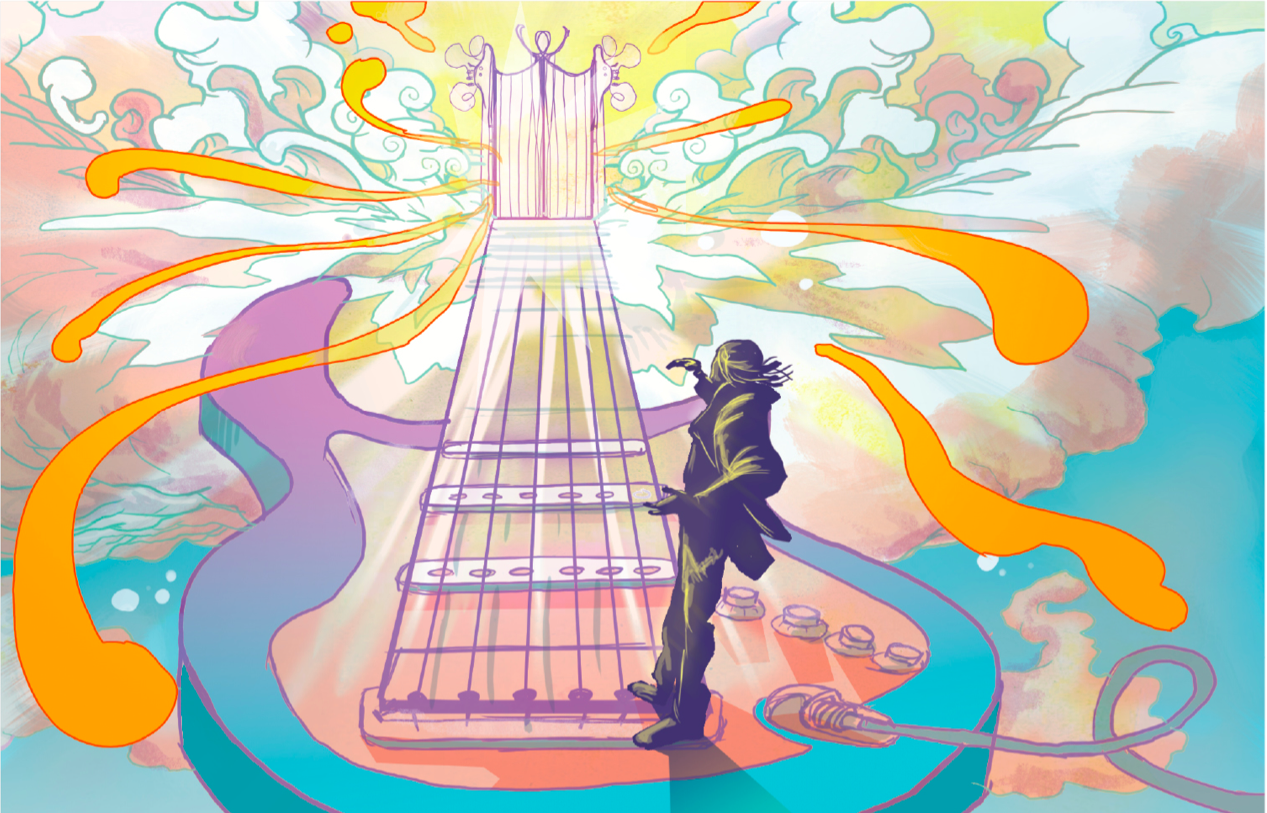 Not all song lyrics are purely concept-driven. The ‘story song’ goes back hundreds of years through the European folk tradition, and has cheerfully survived the birth and growth of rock ‘n’ roll. Johnny B Goode, All Right Now and Norwegian Wood take a narrative approach to lyric writing, whereby each verse continues the characters’ storylines. But even in narrative songs, the plot is almost always very simple; you can’t tell a complicated multi-character story very easily in under 4 minutes, and why would your listeners want to hear all this detail when they could be singing along to your great, memorable chorus?
Of course, for every ‘law’ in lyric writing you can find a classic hit that breaks it. Stairway to Heaven apparently starts as a simple tale of the “lady who’s sure…” but our girl and narrator soon finds themselves being led by the pied piper through a magical world of songbirds, smoke rings and windy echoing forests. Where’s yer clarity of meaning there, then? Well, this demonstrates the necessary balance that lyricists need to find between clarity and being, well… lyrical. Stairway is filled with simple lyric phrases that ‘sing well’, using powerful vowels, easy syllable scansion and, above all, strong visual imagery (interestingly, it also has lots of lines that don’t rhyme). How did they manage to write such an enduring song without being clear about its meaning? Well, it was the 1970s.
Adding imagery, by using adjectives or nouns that your listener can visualise, can almost literally paint pictures. And if the images you use also sound great when sung, you may be onto a winner, even if the Big Idea is a little murky. Yellow matter custard. Ploughmen dig my earth. We skipped a light fandango. Well, it was the 1960s.
Many an inexperienced songwriter tries to defend the right to be impenetrable in lyrics, and some will use examples such as these (and of course Oasis) as justification. Is this just hiding an unwillingness to make that commitment to a core meaning? And why would we want to avoid clarity anyway? Perhaps we’re worried that keeping things simple will make our lyric cheesy or obvious, or maybe, deep down, we just don’t want the hassle of rewriting and editing lyrics until they make sense. Whatever the reason, it’s fair to say that unclear lyrics are the exception rather than the rule. If you can stick to a simple idea, and say something emotionally true that your listeners can relate to, your lyric will survive, whether you’re writing for the mosh pit, acoustic stage or chick-flick soundtrack.