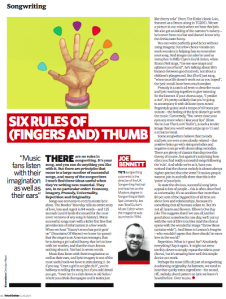 There are no rules in songwriting. It’s your song, and you can do anything you like with it. But! There are principles that occur in a large number of successful songs, and many of the songwriters I teach find these ideas useful when writing new material. They are, in no particular order, Economy, Imagery, Prosody, Universality, Repetition and Originality.
Songs use word economy to communicate lyric ideas. The Beatles’ Yesterday tells an entire story of love, loss and regret in 84 words – and 125 seconds (and it holds the record for the most cover versions of any song in history). Many successful songs start with a killer first line that provides lots of information in a few words. When we hear “Stacey’s Mom has got it goin’ on” (Fountains of Wayne) we know (or guess) that the singer is an American teenager, that he is dating a girl called Stacey, that he’s in love with her mother, and that the mum knows nothing about it.  Not bad in seven words. 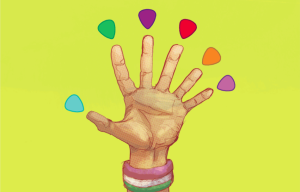 Music fans listen with their imagination as well as their ears – and lyric imagery is one of the most useful tools we have in stimulating it. So if you say “I met a girl in a night club” you’re halfway to telling the story, but if you add detail you get “I met her in a club down in old Soho / where you drink champagne and it tastes just like cherry cola” (from the Kinks’ classic Lola – TG205). We see a picture in our minds when we hear this lyric. We also get an inkling of the narrator’s naivety – he’s never been to a bar and doesn’t know why the drinks taste funny.
You can write perfectly good lyrics without using imagery, but a few choice visuals can work wonders in helping fans to remember your song. And images can also be used as metaphor. In Biffy Clyro’s God & Satan, when Simon Neil sings “the see-saw snaps and splinters your hand”, he’s talking about life’s balance between good and evil, not about a children’s playground. But if he’d just sung “when your life doesn’t work out as you hoped” the lyric would have been much weaker.
Prosody is a catch-all term to describe music and lyric working together to give meaning for the listener. If your chorus says “I Predict A Riot” it’s pretty unlikely that you’re going to accompany it with delicate open-tuned fingerstyle guitar and a tempo of 60 beats per minute – the feeling of the lyric doesn’t go with the music. Conversely, “You never close your eyes any more when I kiss your lips” (from You’ve Lost That Lovin’ Feeling) is such a tender image that you won’t want amps up to 11 and a Screamo vocal.
Some songwriters believe that melody and lyric are even more closely related – that positive lyrics go with rising melodies and negative ones with descending melodies. There are plenty of classics that disprove this theory, of course, but again it’s surprising how often you find really successful songs following the ‘rule’. And while we’re at it, have you noticed that the chorus melody is almost always higher-pitched than the verse? It makes people want to join in and tells them that this is the ‘point’ of your lyric.
To state the obvious, successful song lyrics appeal to lots of people – this is often described as Universality. It’s no accident that more than 80% of the biggest hits of all time are about love and relationships, because it’s something that all humans relate to. But it’s not all hearts and flowers. Elbow’s One Day Like This suggests that if we can all just feel good about ourselves for one day, we’ll put up with the rest of life’s troubles (and the chorus opens with the wonderful image “throw those curtains wide”). And listen to Lennon’s Imagine – who wouldn’t agree that there should be more love in the world?
Repetition! What is it good for? Absolutely everything! Say it again. It might not seem terribly ‘clever’ to simply repeat the title in your chorus, but it’s amazing how well this simple device can work.
Perhaps the most difficult part of songwriting is achieving originality. As listeners, we need to hear that quirky extra ingredient – the sound, riff, melody, chord pattern or lyric we haven’t heard before. Over to you.
Download Total Guitar magazine for iPad/iOS5