Skip to content
0 comments on “Anatomy Of The Hit: Billie Eilish’s ‘Bad Guy’”

[This column was originally published on TIDAL.com, and is reproduced here by permission. Words: Joe Bennett]

TFW you’re driving and you hear a new song on the radio that makes you pull over to hear it better? I’ve had it three times. The first time was Eminem’s “Stan” in 2000. I just had to know how it ended. The second was in 2013, when I thought Daft Punk’s “Get Lucky” was a 1970s disco classic I’d somehow missed. And the third was Billie Eilish’s “Bad Guy,” partly because the production was so original, but mostly because the vocal was so, well, disturbing.

Thematically, the song is about relationship power dynamics. For all the machismo of the “you” character, and that upsetting opening violent abuse image in the first line, Billie herself is the titular “Bad Guy.” She can out-scare and out-dare him. If he wants to “take control,” she’ll go along with it, up to a point, but she holds all the cards: if he steps out of line, there will be mama-disappointing, girlfriend-antagonizing, dad-seducing hell to pay. The production throughout supports this theme, balancing the scary and the ironic as Billie’s vocal performance veers between threat and disinterest.

[update – the day after]

I correctly predicted the winner (Netherlands), but my second and third place predictions (Sweden and Australia) were a little further down the list: Sweden was 6th, Australia 9th. Not bad.

Here’s an interactive infographic of the final scoreboard. The final top 9 were as follows (last column shows my prediction):

Welcome to the 2019 Eurovision live musicology blog, now in its ninth year. This site has provided live (or pre-live) music analysis of the ESC final every year since 2011, previously during the UK live broadcast. Since 2016, the text has been written from Boston USA, 5 hours behind UK time and, this year, 7 hours behind Tel Aviv, where the show takes place.

The Contest can be watched on YouTube, and across many European and US networks and time zones. Parts of the blog post are typed as-live, but I’ve uploaded everything in advance so you can follow along with the show. For any non-Europeans who are unfamiliar with Eurovision, the Wikipedia page gives a great overview.

As before, I have posted predictions of the winners before the voting begins. 2015 is the only year so far that all three were correct, and in the correct order, but I’ve gotten close with the top few most of the time.

This year I’m including more of the chord loops, so that keyboard/guitar people can play along. These chords are transcribed at speed, and are sometimes slightly simplified for text purposes (e.g. there aren’t always 2nd/3rd time bars etc).

And, as always, I recommend music creative types (particularly songwriters and producers) read Milton Mermikides’ excellent Deux Points’ article, which gives top tips on how to write those fair-to-middling low-scoring ‘Euro-formula’ songs. As you listen to tonight’s show, look out to references to the Aeolian mode aka natural minor scale (in music generally, the least exotic of all the minor scales; in Eurovision terms, an essential signifier of cultural and emotional authenticity).

My predictions – (added before voting begins)

END_OF_DOCUMENT_TOKEN_TO_BE_REPLACED
0 comments on “Anatomy of the hit: Ariana Grande’s ‘7 rings’”

As a music theory geek, I love to get inside songs and figure out why we like them. There’s something beautiful about the ability of a mainstream hit to bring people together. And when the songwriter and singer is as extraordinary a talent as Ariana Grande, we can be sure we’re putting the very finest pop product in our ears.

So let’s dive in, intro first, middle bit in the middle, and outro at the end, as has been the way since the dawn of time.

We hear a single reverbed synth sound playing half notes, with occasional 8th note passing notes, and no indication of what’s to come. That’s sparse, even for a trap-pop intro. At this point, we don’t even know if we’re hearing 140BPM (fast pop) or 70BPM (slow ballad).

END_OF_DOCUMENT_TOKEN_TO_BE_REPLACED
0 comments on “The Art of Listening To Songs #apme2018” 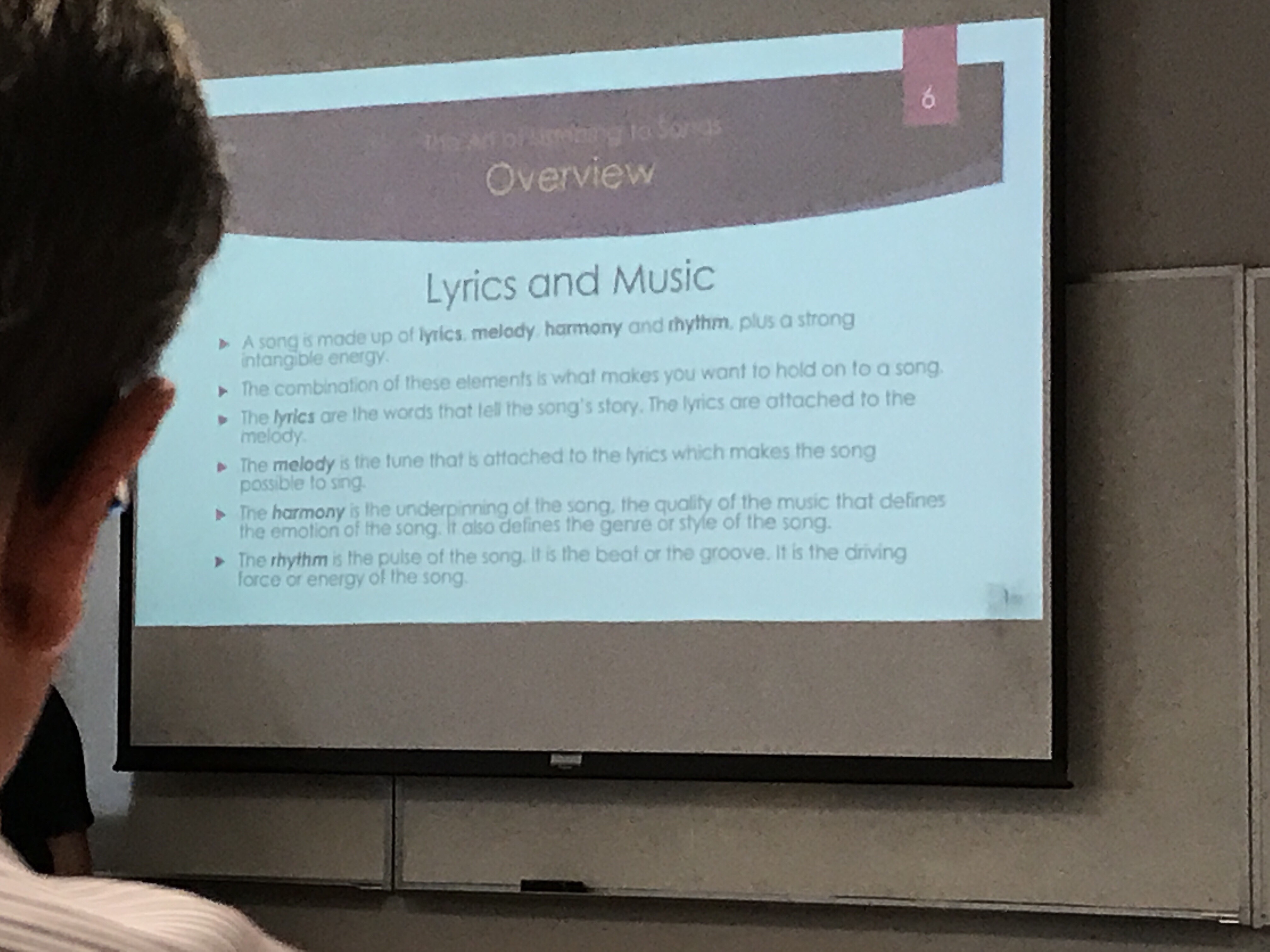 Randy introduces himself and talks briefly about his work in music education, including his publications, talks, and his experience of listening to other songwriters’ work over many years. Today he’s sharing with us the structure of his 16-week songwriting course, and he begins with the philosophy of definition i.e. the question ‘what is a song?’. He suggests that most technical descriptions of a song fall short of the mark of describing its subjective effects on listeners, noting how difficult this intangible would be to achieve. He provides a traditional melody-lyric-harmony definition of a song (i.e. omitting the Sound Recording or arrangement), and then asks the potential student question “If [a song is too intangible to hold], then how can I learn about it?”.

To the great amusement of the audience, Randy now talks us (literally, talks us) through the whole of the lyric to James Brown’s ‘I Got You’, demonstrating that it’s clearly a love song. He now separates the [love] song from the arrangement, describing the horn lick and Brown’s vocal as ‘ear candy’, building on the core lyric’s emotional intent.

Fish and fowl? Mapping the no-man’s-land between popular music studies and jazz studies

OUTLINE: In his article ‘Is jazz popular music?”, Simon Frith (2007: 10) has noticed that the “separation of jazz and popular music studies is an indisputable fact of academic life”. Indeed, due to their historically different developments, both disciplines have established sets of aesthetic norms, separate institutional bases, and specific methods to identify and cope with the musics they have found worth studying. Recently, Matt Brennan (2017) has shown the influence of music journalism on these scholarships. Ultimately, both succeeded – more (jazz studies) or less (popular music studies), at least in the German-speaking world – as distinctive disciplines with developed curricula.

This keynote argues, by pointing to examples throughout the history of recorded music, that this neat division of the musical world is precarious because it prevents a fertile exchange between jazz and popular music studies; for instance, the development of (still) so-called New Jazz Studies during the last twenty years has only occasionally led to serious discussion in the popular music field. Moreover, this separation excludes a lot of musics, musicking and musicians in between these two fields. In particular, by using an example from the realm of electronic dance music, the lecture advocates a joint effort to fill the void in between the front lines of jazz and popular music that, potentially, may lead to structural changes in teaching and researching jazz and popular music.

BIO: André Doehring is professor for jazz and popular music research and head of the Institute for Jazz Research at the University of Music and Performing Arts in Graz (Austria). Before, he has been assistant professor at the University of Gießen (Germany) where he received his doctorate in musicology and had studied musicology and sociology. He is president of the International Society for Jazz Studies (IGJ), member of the scientific board of the German Society for Popular Music Studies (GfPM), co-editor of GfPM’s online journal Samples and since 2017 of IGJ’s yearbook Jazz Research and Studies in Jazz Research. His main research topics are the social histories and historiographies of popular music and jazz, analysis, and music and media. Currently, he is involved into establishing a European network for transnational jazz studies.

André laments the relative historical disinclination of academe to be prepared to engage musicologically with pop and jazz. He states that there is still a percentage bias against non-classical musics, citing as evidence the tiny proportion of popular (as opposed to classic) musicology professorships in German universities. He leads us through the history of some pioneers, including Marshall Stearns, who founded the Institute for Jazz Studies in 1953 New Jersey, USA.  We are led through the gradual growth of jazz studies in (mainly US) Higher Education from the 1950s onward.

This week I’m at the biannual conference of the International Association for the Study of Popular Music. Our hosts are the University of Kassel, Germany, and the conference features presenters from all over the world.

Our opening keynote speaker this morning is Robin James, whose academic work spans philosophy, pop music, sound studies, and feminism. One of the pleasing trends I’ve been seeing in academic conferences in recent years is the increased willingness of presenters (particularly younger scholars) to post their work online. Robin has generously shared not only her slides but the full text of the talk. The keynote goes into considerable depth, so I won’t attempt to summarise it here, other than to say how much I enjoyed Robin’s acrobatic thinking as she leapt gracefully from Pythagorean philosophy to big data, US neoliberalism, YOLO and Chill culture, and illustrated all of this with a brief musical analysis of Harry Styles’s Sign Of The Times (embedded below) and Beyoncé’s Lemonade.

Next morning: the results

Not my best year so far, but not my worst either.

(Bulgaria also somewhere in the top 5)

How to use this blog entry

When the show begins, scroll down to the first performer (Israel) and read the text live along with the show, or just watch the videos. Intro

Welcome to the 2017 Eurovision live musicology blog, now in its seventh year. This site has provided live music analysis of the ESC final every year since 2011, previously during the UK live broadcast. Since 2016, the text has been written from Boston USA, 5 hours behind UK time and 7 hours behind the International Exhibition Centre in Kiev.

The Contest is now broadcast in the US, which would be a 3pm start time here, but the final usually (as this year) coincides with my students’ Commencement. So blog will still be ‘pre-live’, but the comments and predictions are published an hour or so ahead of the live broadcast of the final. This means I’m working from the published running order and watching the videos on the ESC website. For any non-Europeans who are unfamiliar with Eurovision, the Wikipedia page gives a great overview.

As before, I’ve posted predictions of the winners before the voting begins. 2015 is the only year so far that all three were correct, and in the correct order, but I’ve gotten close with the top few most of the time.

(scroll down along with the show, or if you’re reading this after the show has ended, watch the videos)

Lots of builds here, harmonically and dynamically. The whole song form is three big ramps; the first is from the intro through verse 1 to the end of chorus 1; the second from verse 2 to the end of chorus 2; then a drop bridge, with a final ramp to the end. There are really two 8-bar pre-choruses, both of which use the chorus chord loop of Ab | Cm | Bb | Fm – so you get the feeling of chorusyness two, arguably three times. The song could be called ‘breaking me to pieces’ and have a perfectly good chorus, but when he hits the high autotuned C note on the title’s “I feel alive”. I’m typing this based on the video – so for those watching it live, see how they manage that high falsetto note. His ability to hit it (or mime convincingly to it as a ‘backing’ vocal) could affect the score bigly. Sorry, typing this from America.