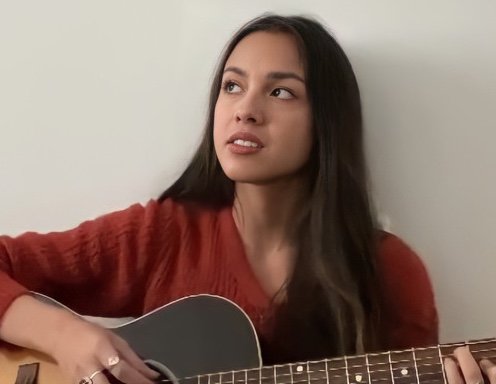 [JB note: I’m pleased to welcome my friend and colleague Will Bennett as a guest blogger. Will (no relation) is a PhD musicology researcher at Harvard, and also a valued member of the JBMS consultancy team. I asked him a couple of weeks ago what he thought of the alleged song similarities on the Olivia Rodrigo album; here’s his response]

Teen angstmonger Olivia Rodrigo has scored a rare hattrick with her debut full-length Sour, sparking three web-wide debates about musical copyright in as many months. The first furor came courtesy of brutal, two minutes and twenty-three seconds of exemplary Gen Z-mo lyrics—“I’m not cool and I’m not smart, and I can’t even parallel park”—and concrete-crunchy power chords patterned in a distinctive intarsia of repeated strums and chromatic descents. On that latter point, listeners noted a striking similarity to Elvis Costello’s Pump It Up, which prominently featured an iteration of that idea some four decades prior. The social media hubbub around the resemblance became too loud to ignore, and Costello took to Twitter to defend Rodrigo: in his mind, she had simply “[taken] the broken pieces of another thrill and [made] a brand new toy”—which is “how rock and roll works.” 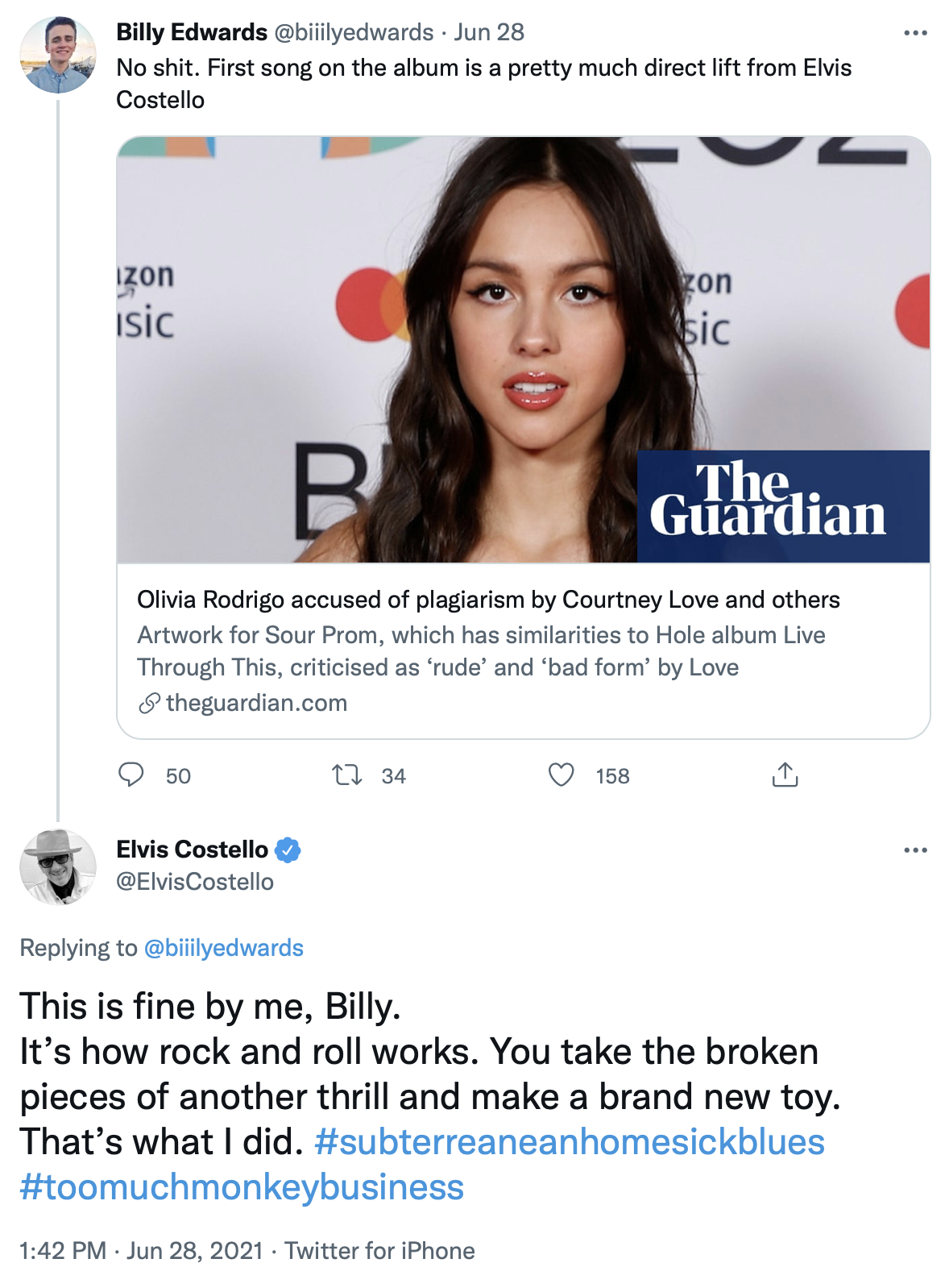 Transcription of brutal (top) and Pump It Up (bottom), main riff.

Scarcely a week later, Taylor Swift, Jack Antonoff, and St. Vincent were discreetly ushered in as co-writers on déjà vu, another single from Sour. Earlier in the year, during an interview with Rolling Stone, Rodrigo had cited Swift’s Cruel Summer(written by the three artists above) as an influence on that track, referencing Swift’s “yelly” vocals in particular.This evidently constituted enough of an artistic debt to warrant a credit, much to the confusion of some commentators, and the roster of writers multiplied overnight. This was not the first time Swift was listed as Rodrigo’s co-composer either, even though the two have never shared a writing room. 1 step forward, 3 steps back, the fourth cut on Sour, was composed in part by Rodrigo retrofitting her own melody and lyrics to the chords of Swift’s New Years Day. Consequently, it was decided that 1 step forward contains an interpolation of that earlier work, and Swift was credited as a writer before the song saw release.

The most recent dispute would likely have left a mere ripple on the surface of the news cycle, a soft plop similar to the way Swift et al were nocturnally addended to déjà vu’s metadata, were it not for the social media savvy of various parties. On Tuesday, Spotify declared that Rodrigo’s good 4 u was the song of the summer. Warner Chappell Publishing quickly set about congratulating Hayley Williams and Joshua Farrow of Paramore on Instagram, who had hitherto not been publicly acknowledged as writers. This late addition (or acknowledgement—rumor has it that the two parties were negotiating royalties before the song had been released, à la 1 step forward) legally enshrines what had previously been the prevailing vernacular view: good 4 u sounds quite a bit like Misery Business, Paramore’s 2007 breakthrough hit. It’s hard to disagree. Admittedly, some of the similarities are “less tangible” than others, to use the parlance of a journo baffled by Swift’s apparent monopoly on yelling. The verses loosely cohabit a common harmonic space—mostly undulating between chords “vi” and “V” from a major-key perspective, to be technical—but they share that with many other songs, brutal included. So too are good 4 u and Misery Business adjacent in matters of timbre, arrangement, and attitude—but it’s hard to brew a palatable punk-lite for the hormonal masses without the appropriate scènes à faire. After all, the emotional register needs to be intelligible to those who might have had more Baby Shark than Babyshambles in their playlists a few short years prior. 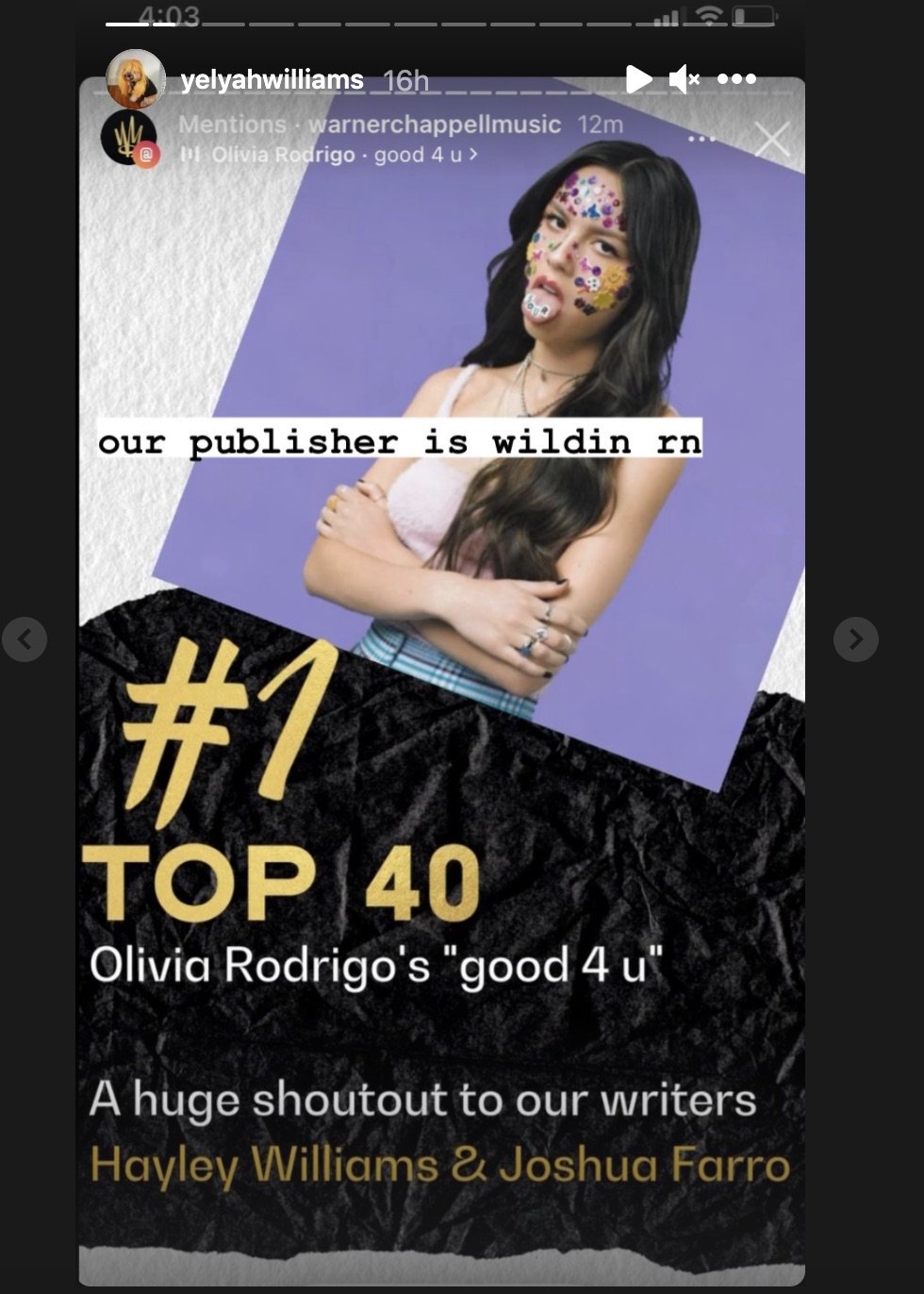 The choruses of the two songs, however, demonstrate an obvious aesthetic convergence that some are saying go beyond common elements of genre. The chord progressions are very nearly the same, and the melodies exhibit clear gestural parallels. Both hooks start approximately one beat into the bar, and leap theatrically to “mi” before descending to “do” just before the third beat of the second measure; they anticipate the third measure together on “re,” after which there is an obvious divergence—Rodrigo intones a sing-song descending interval (“…healthy, not me”) that has no corollary in Misery Business—but the fourth measure comes close to realigning the two, with a similar rhythm and general emphasis on “mi.” Finally, the two hooks wrap up with an identical gesture: a descent from “do” to “la” on the last word of each line—“ask” and “now”—that bridges the end of the first four-bar phrase with a near repetition, in both cases. 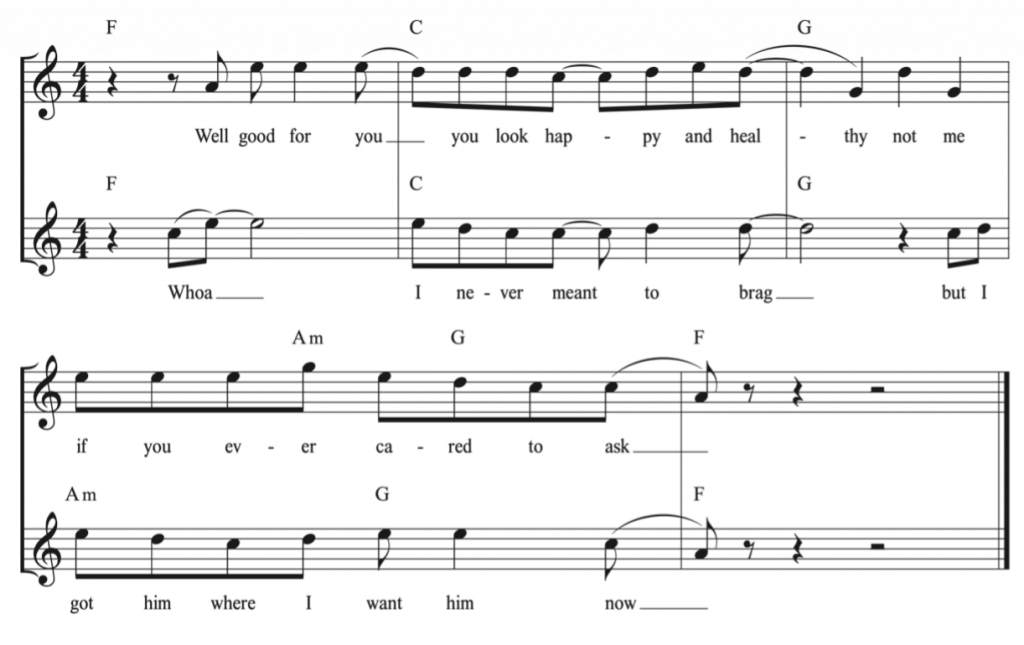 good 4 u (top) and Misery Business (bottom), chorus. Both transposed into C major for ease of comparison.

If you simply count the identical notes by eye, the melodies aren’t similar at all. But the untrained ear, unburdened by such melodic reductionism, can perceive similarity through context. The likeness first captured the public imagination when TikTok users started mashing up the two songs: influencers would show themselves listening to good 4 u, only to be transported back to 2007—complete with questionable “scene kid” makeup and, entirely anachronistically, VHS-style filters—when a seamless segue to Misery Business was made. (That apparent seamlessness was due to a light bit of technical jiggery pokery, in truth: the two songs are in different keys, but Misery Business was shunted up to make the point. But hey—I did the same thing in the transcription above.) Consequently, the similarity between good 4 u and Misery Business became a meme, the lingua franca of the internet native. And memes get people invested: BBC News made an Instagram post to communicate the new credit to its followers, and over eighty-one thousand users have “liked” it to date. It’s hard to imagine that that a revision to ASCAP metadata would be receiving this much attention without those viral efforts.

The volume of voices asserting that the two songs were similar raises the question of whether the court of public opinion exercised an undue influence over the decision. Given the arguably abstract correspondences between the two works—a shared “contour” or “gesture” is not the same thing as two melodies being literally identical—it seems likely that the judgement was one of “comprehensive nonliteral similarity”; that is, the two works just sound pretty much the same in general, rather than there being any specific “gotcha” moment where a substantial string of pitches and rhythms align exactly. If so, the “less tangible” elements brushed aside earlier make important contributions to the overall impression of one work being indebted to another. Under these circumstances, the collective intuitions of lay-listeners (as used in juries for some US copyright infringement litigation) arguably make for a more compelling case than the pedantic note-counting inclinations of “experts”. Perhaps virality, as an index of widespread attitudes, has provided a democratic form of evidence?

Rodrigo’s string of headline-hitting cases might be a cause of concern for some, a sorry indication of how litigious pen-pushers and avaricious artists are coming to dominate the world of pop. Faced with such a grim prospect, who can’t help but admire Costello’s laissez-faire philosophy? That’s rock and roll, man! But let’s not romanticize it: one need only recall the innumerable occasions in which Black artists were ripped off in the history of recorded music (many of whom remain unremunerated) to appreciate how corruptible this utopian characterization of authorship can be. Crucially, fair compensation for those who have labored to create something original incentivizes others to keep doing so; as such, acknowledging when one might have been a little too inspired by the work of others is an integral part of that process. An artist doesn’t even need to have copied another deliberately, a case famously made in Bright Songs Music v. Harrisongs Music, in which George Harrison was found to have “subconsciously” infringed upon He’s So Fine by the Chiffons in My Sweet Lord. The frequency with which Rodrigo and collaborator Dan Nigro have been expected to share authorship is therefore not necessarily indicative of a lack of artistic integrity. Indeed, part of the undeniable charm of Rodrigo’s music is that each song is a perfect genre piece—good 4 u hits immediately and unambiguously as an impeccable slice of bubblegum punk, and part of that impression is almost certainly due to the fact it recalls another excellent example of that genre so strongly. As Judge Owen reasoned with the Harrison case, a songwriter might be exploring various musical possibilities and come across something that just seems to “work”; that may be due to compositional nous, or it may be because their “subconscious mind knew it already worked in a song” that their “conscious mind did not remember.” Whether or not this happened in the case of good 4 u is hard to determine, but either way, it resulted in an excellent song—and that excellence is inextricably tangled with the familiarity of its elements. So, Olivia, if you’re reading this: please keep making music that exploits the affective intensity of familiar feelings. I hope you keep having to revise those credits.