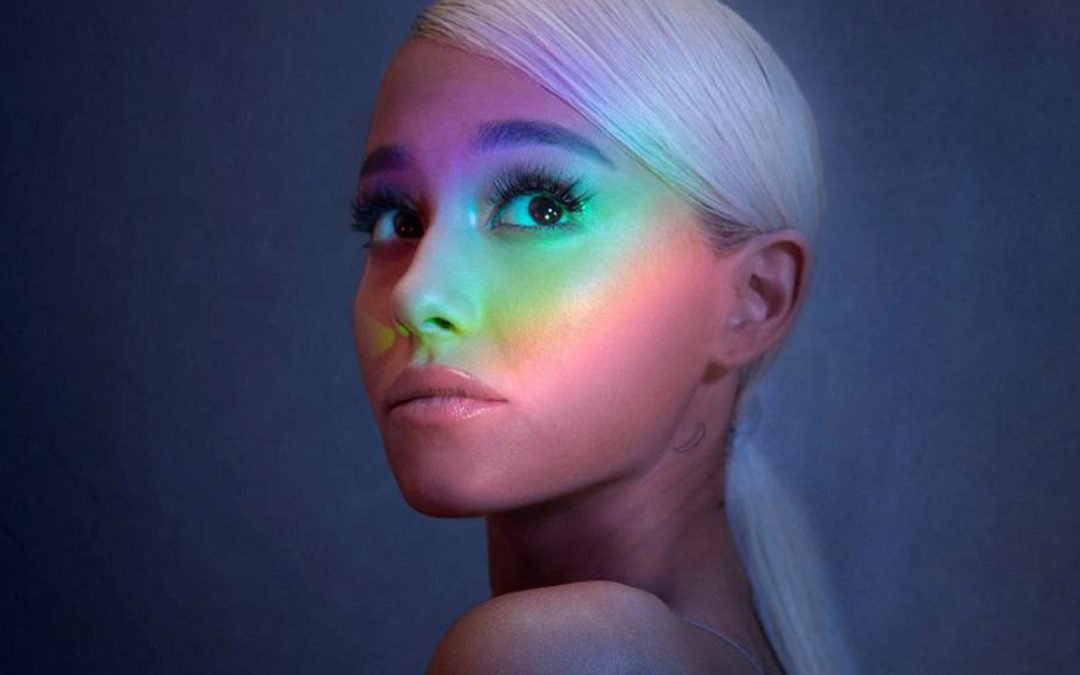 As a music theory geek, I love to get inside songs and figure out why we like them. There’s something beautiful about the ability of a mainstream hit to bring people together. And when the songwriter and singer is as extraordinary a talent as Ariana Grande, we can be sure we’re putting the very finest pop product in our ears.

So let’s dive in, intro first, middle bit in the middle, and outro at the end, as has been the way since the dawn of time.

We hear a single reverbed synth sound playing half notes, with occasional 8th note passing notes, and no indication of what’s to come. That’s sparse, even for a trap-pop intro. At this point, we don’t even know if we’re hearing 140BPM (fast pop) or 70BPM (slow ballad).

Yeah, breakfast at Tiffany’s and bottles of bubbles
Girls with tattoos who like getting in trouble
Lashes and diamonds, ATM machines
Buy myself all of my favorite things
Been through some bad shit, I should be a sad bitch
Who woulda thought it’d turn me to a savage?
Rather be tied up with calls and not strings
Write my own checks like I write what I sing

After that on-the-beat synth intro, we’re expecting something with a 16-feel groove, but Ariana launches into the waltz-time melody of Rogers and Hammerstein’s “My Favorite Things.” Like that earlier song, “7 rings” begins with a list; “Breakfast at Tiffany’s and bottles of bubbles” begins a catalogue of R ’n Bling goodies, interspersed with references to BFFs: “Girls with tattoos who like getting in trouble.”

The lyrical message is clear: Ariana buys stuff for herself and for her friends and pays for everything. She’s authentic and real, in shopping as in songwriting: “Write my own checks like I write what I sing.”

When we get to “Lashes and diamonds, ATM machines” the track stays on one chord of F# minor, avoiding the original’s “brown paper packages…” agile changes, and Ariana powers on through that melody, perhaps avoiding a musical theater cliché (trap?).There’s a keyboard starting to outline the chords in this section. No drums yet…

My wrist, stop watchin’, my neck is flossy
Make big deposits, my gloss is poppin’
You like my hair? Gee, thanks, just bought it
I see it, I like it, I want it, I got it

Ahhh… there they are. And what a groove it is. The bass skips along with a mellow soft-attack-quick-decay sound, playing dodgeball with the vocal, and bookending the line “my neck” — root note before, 5th note after, leaving the vocal in the space between. The hi-hats do their trappish (Trappist?) thing by adding micro-groove zipper effects, using the sub-sub-sub beat division of 32nd notes.

And check out that detail — the zipper hats appear on beat 2 in the first bar of this section (after “wrist”), then a half-beat later (“flossy”) in the second bar, with a subtle filter effect. It’s difficult to hear all this the first time, but noticeable if you listen on headphones, or if you sample the whole track and play it back at quarter speed (oh yes, we did).

Here’s the “real” chorus, with thick backing vocals and the hook “I want it, I got it” leading the way. There are some subtle “uh” male vocal samples on the downbeat for the first 2 bars, with a falsetto “hooo” voice singing the high keynote of C# on the off-beat in lines 2 and 4, so we get a seesaw effect between the two.

I’ll leave it to others on the Internet to debate hip-hop cultural appropriation, or even plagiarism. Suffice it to say that “7 rings” makes many allusions throughout, including Lil Mama (“My lipgloss is cool”), Notorious B.I.G. (“Gimme the loot”), Princess Nokia (“It’s mine, I bought it”) or 2 Chainz (“It’s mine, I spend it”) or even Beyoncé (“I see it, I want it”). Copying or homage? You decide.

Wearing a ring, but ain’t gon’ be no “Mrs.”
Bought matching diamonds for six of my bitches
I’d rather spoil all my friends with my riches
Think retail therapy my new addiction
Whoever said money can’t solve your problems
Must not have had enough money to solve ‘em
They say, “Which one?” I say, “Nah, I want all of ‘em”
Happiness is the same price as red-bottoms

By verse 2, the “Favorite” list is left behind in favor of an arch philosophy of affluence: “Whoever said money can’t solve your problems / Must not have had enough money to solve ‘em.” There’s a warm soft “oooh” chord pad with low countermelodies, and parallel harmonies for the highlights “…solve ‘em.” The lead high improv melody peaks on summative “Happiness is…” leading us into another pre-chorus/chorus.

Yeah, my receipts be lookin’ like phone numbers
If it ain’t money, then wrong number
Black card is my business card
The way it be settin’ the tone for me
I don’t mean to brag, but I be like, “Put it in the bag,” yeah
When you see them racks, they stacked up like my ass, yeah

Bass and drums drop out here (of course), and we’re down to just two instruments — a soft plucked chord sound and a drone bassline. The vocal here is somewhere between rap flow and melody; there’s variation in syllables between quarter-note triplets (“receipts be lookin’ like”) and staccato stabs (“I don’t mean to brag…”). Some lyric websites describe this section as verse 3, probably because of the chords, but I’m sticking with breakdown, because that’s how it works in the structure. Now… let’s take it to the…

Shoot, go from the store to the booth
Make it all back in one loop, gimme the loot
Never mind, I got a juice
Nothing but net when we shoot
Look at my neck, look at my jet
Ain’t got enough money to pay me respect
Ain’t no budget when I’m on the set
If I like it, then that’s what I get, yeah

The beats here are similar to the chorus, but as before it’s the vocal that takes centerstage. Here the triplet flow is even more full-on, with a G#-C# two-note-melody approach for 4 bars. That high C# highlights the “shoot” “booth” “loop” “loot” “juice” nested rhymes, and the lower G#-F# equivalent phrase doing the same job later for “neck” “jet” “respect” “set” “get.”

A single 8-bar chorus to end, with some soft “yeaahhhh” vocal improvs above, leading to a keyboard-only fadeout that feels like the intro but with more notes (it’s actually from the verse). This is another nice subtle touch — we’re subconsciously being invited to sing out our own “Favorite Things” as the song fades away.

Some musicians might describe “7 rings” as a simple song. I disagree; there’s sophisticated production throughout, and you can lose yourself in the groove’s subtlety and the arrangement’s detailed sound world. Every instrument has its place in the mix, and every beat has its place in the groove. Ariana’s playful lead vocal is engaging enough for a casual listener, but she is so much more than a pop princess — she’s a bona fide singer with real-deal chops (check out her famous impressions).

It’s true that there are only four chords — a repeating harmonic minor one-six-four-five progression of C#m-A-F#m-G#. But when a track has an unchanging element, the rest of the arrangement has to keep the listener interested.

Drums with dynamics and groove variation. Chord loops that cycle in perfect rotation. Mischievous lyrics that everyone sings. There’s my analysis of “7 rings”!