Bill Brunson, Royal College of Music, Stockholm
[JB note – I type this sitting under the Sound Dome in ‘Lilla Salen’, one of the Royal College’s lecture theatres. It appears to be an array of 13, 8 and 4 speakers arranged in concentric circles above a non-raked 100-ish seater auditorium in a large black box space, with options additional floor-level speakers in a circle. We can also see a big stereo FOH ceiling PA and four subs in the corners of the space. I’m sure we’ll hear more – in both senses of the phrase – soon]. 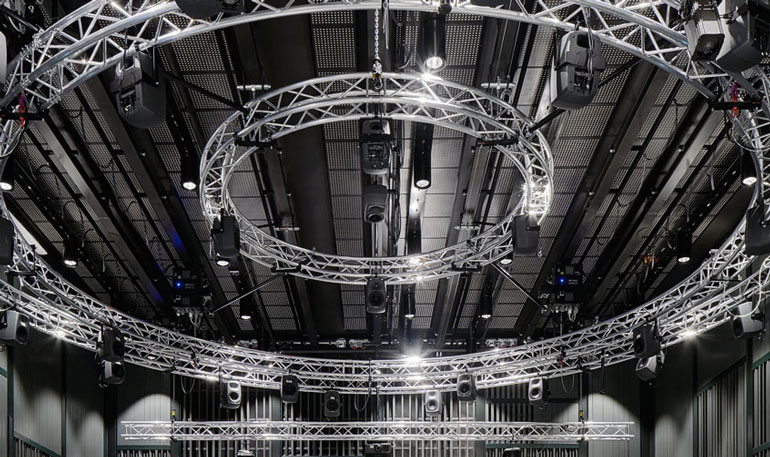 Bill begins with a description of his own background, and like many at ARP he traces his first inspiration back to the moment he first heard the Beatles. He tells stories about his enthusiasm for acquisitiveness in audio, having recently bought three SSL desks after using one for a particular session in an opera house (he notes that, as a Texan, he believes everything should be big).
We now hear an historical description of Stockholm’s Royal College of Music (Kungl Musikhögskolan), going back to the Olympic building of 1912. He leads us through the architectural history, and shares the difficulties of incorporating their SSL 4000 into the older College spaces.
He asks us “when you entered the building through the cafeteria, did you hear it?” and notes the remarkable acoustic treatment in the atrium. All the spaces, including the one we’re in, have layers of purpose – lecture space, performance space, rehearsal room etc. Each performance-specific space in the new build is optimised for particular genres or purposes, including recording.
Mixers, Bill says, have lots of inputs but relatively few outputs. This space, for example, can handle 49 outputs. You need a big desk for this. So they researched the BBC, and used a broadcast infrastructure to choose devices and outputs routing. We now see a physical map of the spaces, followed by an unapologetically complicated back-end diagram of the 32,000 (!) digital lines running by optic fibre through the building (audio over Ethernet/CAT6).
Bill claps his hands. This room (Lilla Salen) has an RT60 of around 1sec, making it fairly dead, but ambient enough to be mentally tolerable for regular speech.
Including the floor speakers (with the three hanging arrays above) the full surround system is 44:4.
We see some of the various surround systems that Bill researched, including Salle Olivier Messiaen – Radio France, and SARC in Belfast, plus IRCAM Espace De Projection, and Sweden’s own Audiorama – a 17.4 system.
We now return to concepts of spatilization, and Bill provides 19thC and earlier classical music examples of composers who intended this effect for audiences.
Fantasia was the first surround sound movie (Fantasound); Bill mentions Cinerama as a visual equivalent. The Philips Pavilion (1958) has hundreds of speakers. The Spherical Halls enabled Stockhausen and others to create full 3D audience experiences, including above and below. Film was the main driver of multi-channel (rather than music) and Bill notes that many music industry people didn’t even think stereo was a good idea. 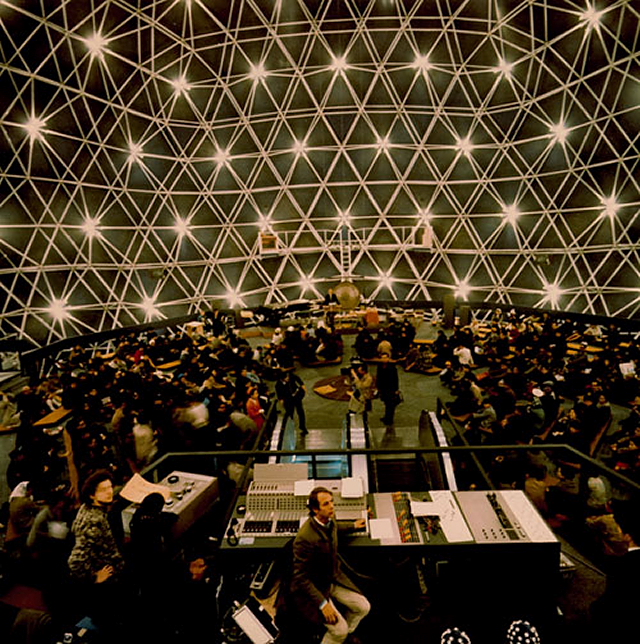 The film industry needs to deliver product to a predictable format for theatres – e.g. DVD 5.1 and Blu-Ray 7.1. Bill argued for industry compatibility in his Stockholm projects.
The paradigms for audio could be seen as 1, 2, 4, 8 and ‘many’. Where does ‘immersion’ happen – the answer is ‘everywhere’. Humans, Bill says, evolved outdoors, and moved indoors as societies developed – he relates this to the drying out of church reverb times over generations, contrasting the musical detail of a Leipzig venue’s space with the harmony blurring of a typical stone cathedral.
From the listener perspective, all directions are equal. There is a sweet spot but it’s not mission critical – listeners can move around the ring and still have a good experience.
Is any sound rendering realistic? Billa rgues that all sound is imaginary/unreal, but perceptually tangible.
Pierre Schaeffer’s acousmatic music implied that there is ‘nothing to see’. He (and Varese) did not necessarily need pre-defined objects (e.g. violins) to make sounds. Techniques such as harmony, melody or counterpoint is, he suggests, a narrow subset of music (as defined more purely as any ‘organised sound’). Being ‘musical’ is experiential and contextual – and it is in the ear of the beholder.
And finally to the audio. We hear – in the full sound speaker array – the following works. [JB note – it’s hard to put across this experience in blog form. Insert amazement-related adjective of your choice.] 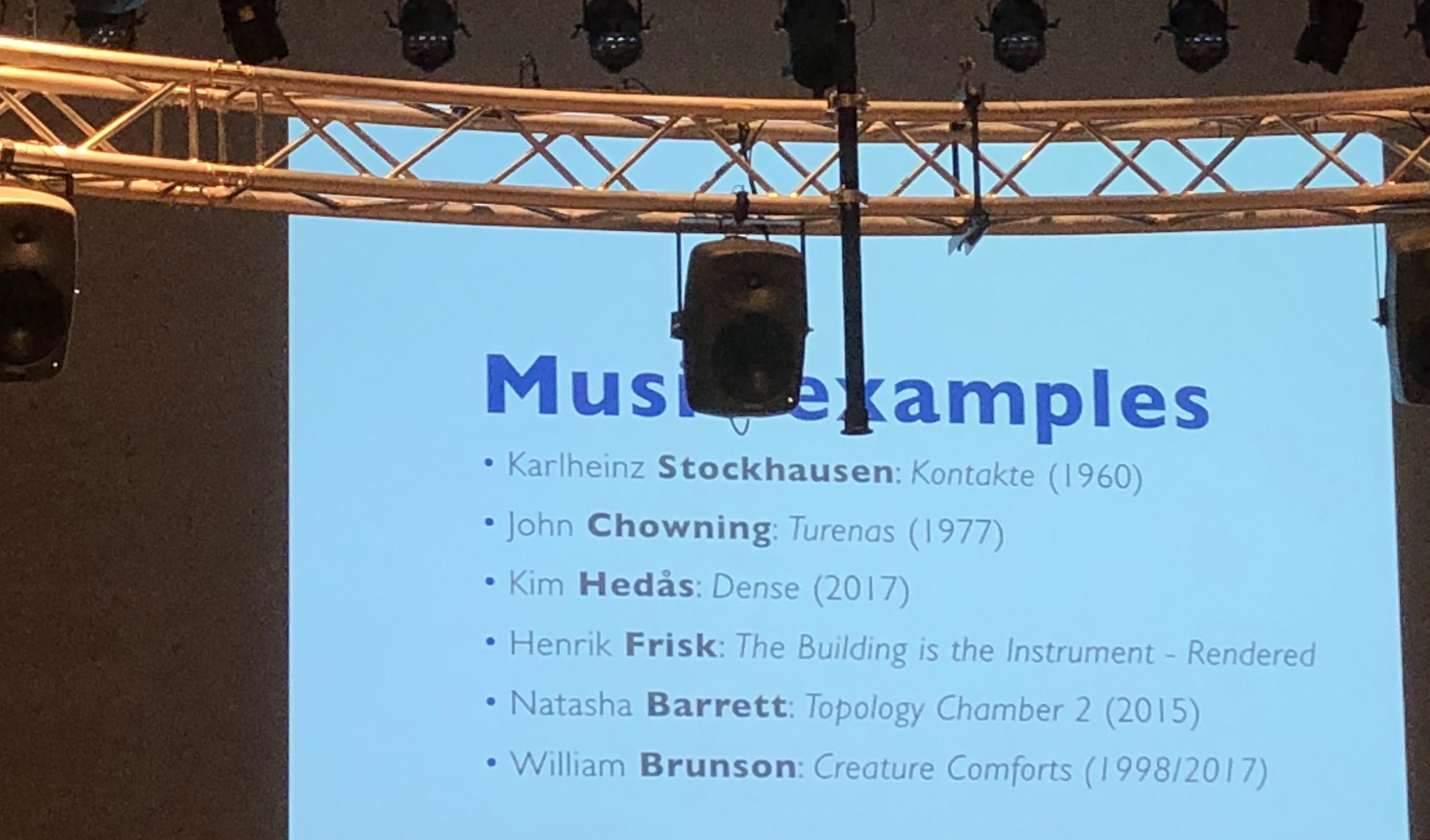