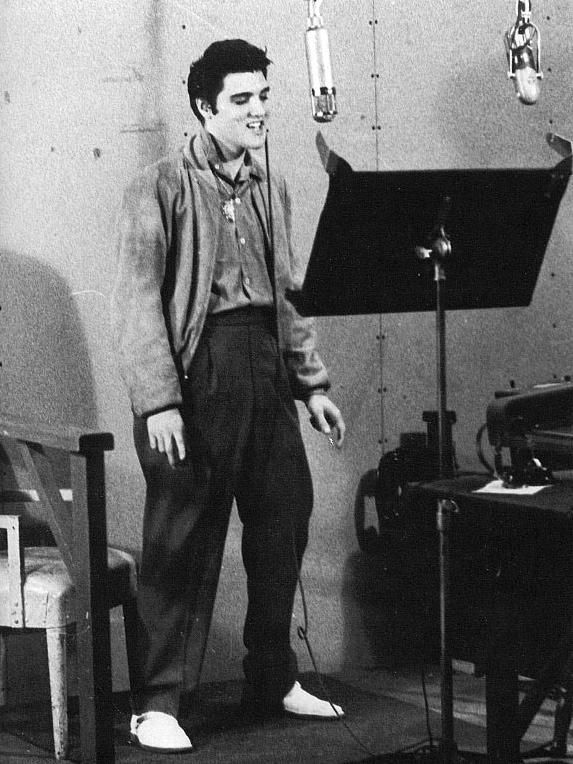 Abstract: “Slap back echo” was created by Sam Phillips for Elvis Presley´s early Memphis recordings. Using cepstrum and autocorrelation, we find that the tape delay used in Sun Studios was 134-137 ms, which is so long that the echo is perceived as a single, distinct echo in the time domain, and not the comb filter coloration of timbre in the frequency domain defined as Box-Klangfarbe. Such coloration would be perceived if a distinct, separate, reflection gave a comb filter with a distance between the teeth (CBTB: Comb-Between-Teeth-Bandwidth) comparable to the critical bandwidth along the basilar membrane in the cochlea. When Elvis changed to RCA Victor´s studio in Nashville, “RCA was anxious to recreate the “slapback” echo…To add them to Elvis’ vocals Chet [Atkins] and engineer Bob Farris created a pseudo “echo chamber” by setting up a speaker at one end of a long hallway and a microphone at the other end and recording the echo live”. Analysis of these recordings gives that the echo is somewhat shorter (114 ms and 82 ms), and much more diffuse, so “slap echo” was not actually recreated. The main findings is that even though the delay time of the Sun Studio “slap tape echo” is long, the echo is still perceived as rather “close”, because the echo is in mono. Panned in stereo, the feeling of being inside a small room would disappear. In addition, we analysed also a shorter delay, as for a possible reflection from the floor of the studio back to the singer´s microphone. These results are more unclear, but we found that such shorter delay would have given Box-Klangfarbe, but if this actually was a floor reflection, the measured deviation of the delay time must mean that the singer moved his head during the recordings (a highly reasonable assumption for Elvis!)

[JB note: Tor’s presentation was outstanding, but it was also extremely technical in terms of physics and data, so I’m not sure I fully did it justice with this live blog post. With this limitation in mind, I’ve posted several of his slides to help the more technical reader].
Tor begins (after a disclaimer that he is not an Elvis fan) with some background about Sun Studios and their recording environment, and some technical analyses of slapback parameters – comb filtering, phase, delay and frequency. We hear the delay from Heartbreak Hotel, leading into a more detailed discussion of how a very short delay creates comb filtering. If you are 1.751m from a wall, ou get a time delay of 10ms, and a Comb Between Teaath Bandwidth (CBTB) of 100Hz. Importantly it is not possible to get rif of this effect with EQ. So if you put a source/mic this close to a wall you will hear this artefact.
There is now a very technical discussion of ‘cepstrum’ – the inverse fourier transform of the log magnitude power [JB note – I confess I didn’t fully understand this level of technicality]. However I infer that Tor means that the particular physical characteristics of the echo from Sun studios echo afford a delay that creates particular frequency characteristics due to comb filtering in the early reflections of slapback echo.
More than 50ms creates a ‘power cepstrum’ of 20Hz, and Tor now provides us with a Power Cepstrum graph for various delay times. He describes ‘Box Klang-Farbe’ in this graph, [and points out as an interesting aside that British people think timbre is a French word and French people think it’s an English word, so they pronounce it in each others’ accents!]. 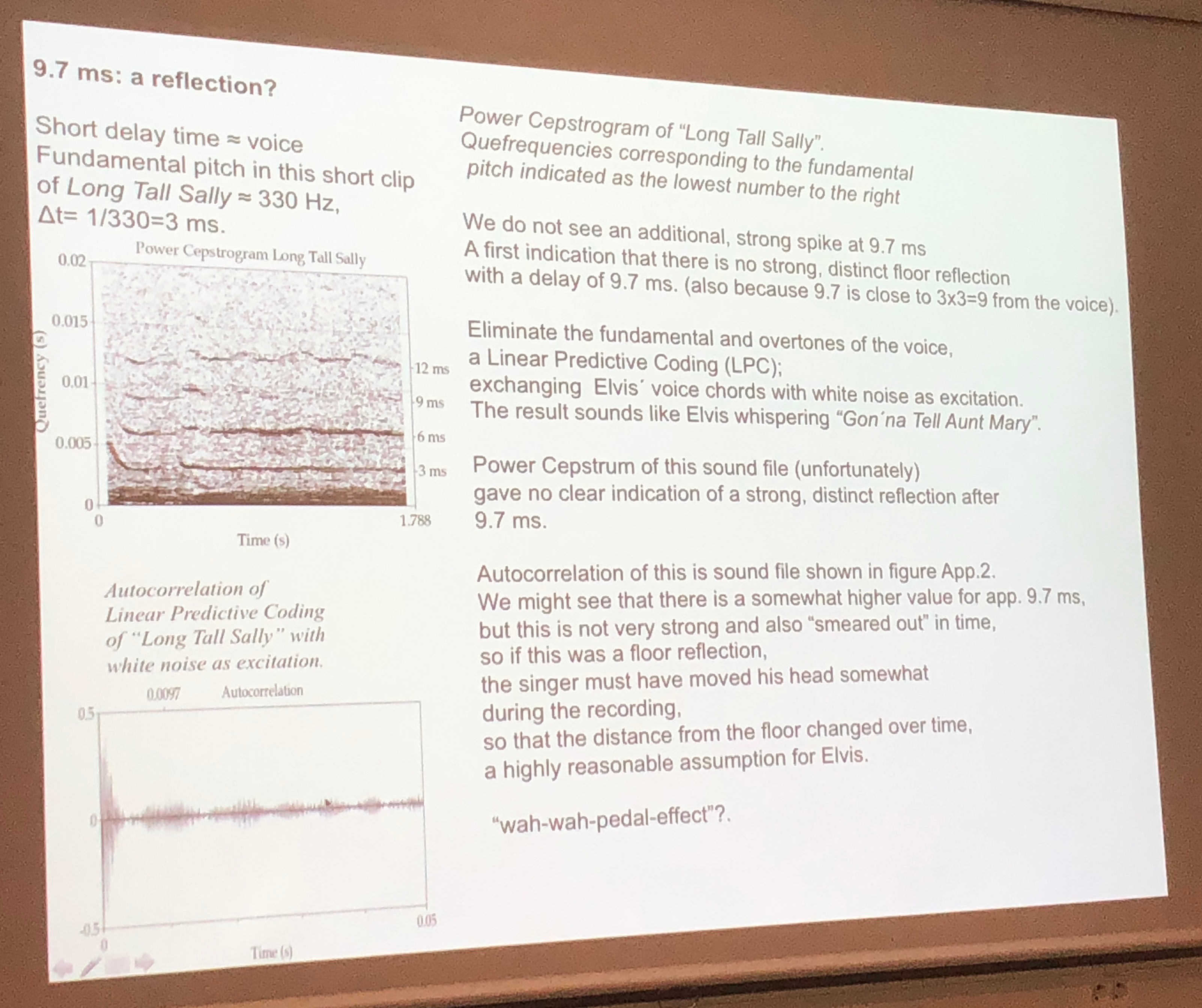 We now see a diagram comparing SUN studios slapback with the recordings of Heartbreak Hotel (137ms) and Long Tall Sally (respectively decreasing delays). Helpfully, as Tor’s title suggests, the recordings are in mono, and he speculates that the reason Heartbreak Hotel’s huge (137ms) delay ‘works’ in the track without clutter is that it’s in mono. He separates the dry and wet signal with his own mix using hard pan, which makes the echo sound very disjointed. [JB note – everyone in the room is thinking “how the hell did he do that from a mono mix”… and Tor explains that he uses Linear Predictive Coding, which separates the formants and enables him to separate the dry and delayed signal].
Tor undertook historical research using photographs of Elvis, and he uses Elvis’ height of 1.82m with the probable reflective characteristics of the recording environment. He perceives a slight wah-wah filtering effect in Elvis’ vocal, which he uses to infer that Elvis slightly moved his head up and down while singing!.

The conclusion speaks for itself: here’s the slide (with helpful data of the slapback times of SUN and RCA studios, plus the songs analysed). 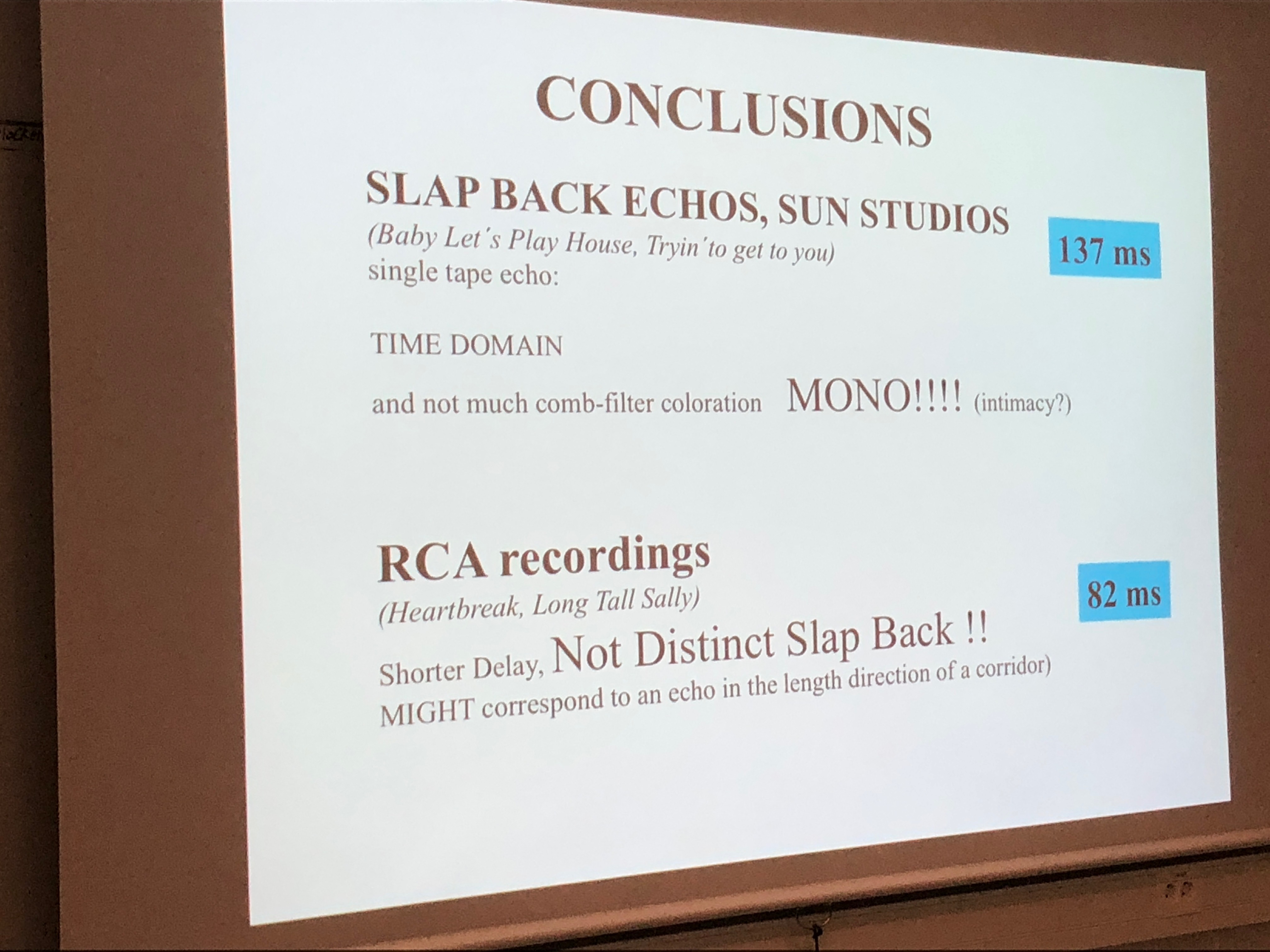