Alex Case: Oops, Do It Again – Gated Reverb From the 80s to Today
(UMass Lowell/recordingology.com/)

Abstract: Among the more absurd sonic concoctions to come out of the recording studio, gated reverb offers a unique aesthetic possible only through loudspeaker-mediated sound. Born in the 80s, it relied upon creative, even counterintuitive application of some of the newest signal processing technologies of the time. The genesis of gated reverb was part discovery, and part invention. Its further development was motivated by rebellion, and confusion. Peter Gabriel did it first, with “Intruder” (1980). Phil Collins made it famous, with “In the Air Tonight” (1980). But David Bowie likely inspired it all with tracks like “Sound and Vision” (1977). This paper tours the development of gated reverb, with audio illustrations showing when, how, and why. What began as a radical reshaping of timbre has evolved into a more subtle form. Gated reverb remains relevant in contemporary music production, not just for 80s pastiche, but as a tool for overcoming masking through the strategic leveraging of its unique psychoacoustic properties.

We begin with the world’s most famous example of gated reverb – the drum fill from ‘In The Air Tonight” and Alex comments… “Before texting, this is what caused cars to swerve”. We then look a signal path diagram and see transient images describing the dynamic properties of a compressed and gated reverb.
We now see a list of rock/pop example from the 60s-80s of songs using synths and drum machines, and Alex notes that the drums were not as sonically innovative as the keyboard sounds at this time, followed by a description of the channel strip of the SSL 4000B, which included both dynamic (comp/gate/expander) on every channel, a built-in reverse STC4021 talkback mic. Alex posits that this poor quality always-on dynamic mic was a factor that would play a part in what was to come.
The ‘stone room’ at Townhouse studios was famously very ‘live’ – a reaction to the ‘dead’ drum sound of the early 1970s; Alex describes it as a ‘snare rebellion’, and cites extravagant 1970s examples of wealthy rock bands using mobile recording setups in mansions and castles.
The other factor is, of course, the creative team, and we see a list of individuals that worked with Collins on ‘Face Value’. The way High Padgham tells it, the initial effect was due to hearing Collins’s drums through the aforementioned talkback mic. Alex now explains how this occurred naturally through the talkback to some extent, and then the way the console was ‘hacked’ by the team to define the gated sound. This sound inspired Peter Gabriel when he was writing ‘Intruder’ and other ablums on Peter Gabriel (3, melting face).

All the affordances needed to create the sound were there, Alex says, and then asks us “Does anybody really know what timbre is?”, giving us a dictionary definition. Timbre is defined partly by what it isn’t – and it isn’t level, pitch, location or duration. If these elements are all the same, but the sound appears different, then that difference is timbral. Alex argues that Amplitude Envelope should be included in a definition of timbre, and cites the known phenomenon of the attack transient of a sound being able to fool the listener’s ear into interpreting the later envelope differently (e.g. adding a flute attack to a violin sample, which makes it sound like flute-like). There follows a discussion of frequency masking and then equal loudness curves, which are connected to a deeper discussion of perception/detection vs duration.
So, to 1974 and the Eventide Harmoniser, citing Anthony Agnello’s inclusion of a keyboard for pitch shifting, which was first used on drums. We hear Bowie’s Sound and Vision, in which the snare is distorted (but not gated, even though it arguably sounds like it is [JB comment – we later discuss the decay characteristics of distorted snares and the way distortion clipping provides limiting and therefore a gate-like decay]). How does a (physical) snare work? Alex discusses these properties and how the snare rattle affects the decay and therefore the way it was treated with these tools.

Finally we hear a mashup of snare samples from the 80s today – covering the following songs in around 15 seconds! 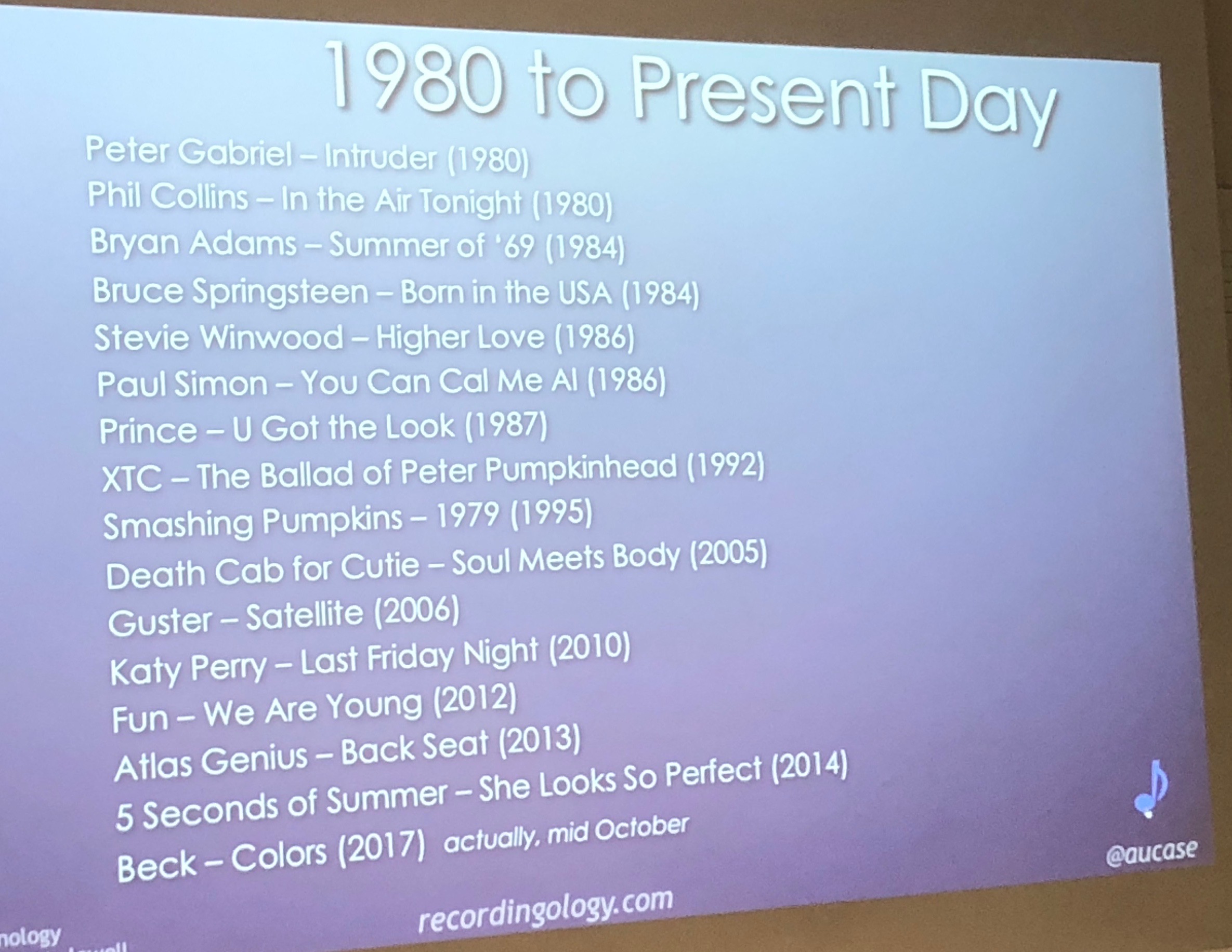