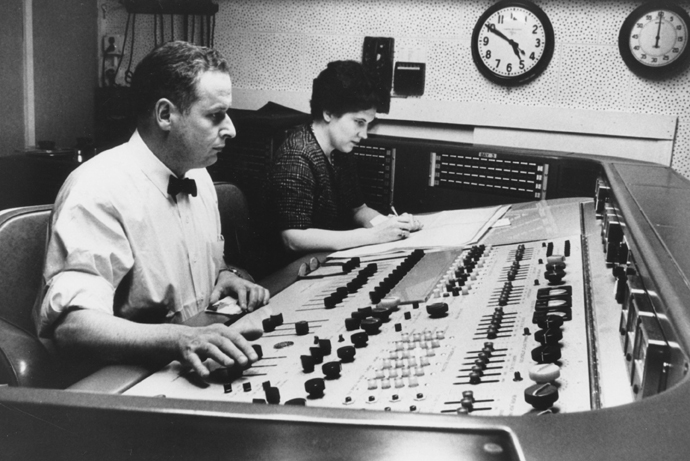 In the early days of stereo recording, engineers would often mix without headphones, even if the final mix was intended for binaural listening.

ABSTRACT: Stereophonic headphones were first marketed in the USA in 1958. Binaural listening (via headphones) became one of the favourite ways for fans to listen to rock albums in the late 1960s and early 1970s. Stereophonic mixes, however, were not necessarily designed for binaural listening. Sound engineers rarely used headphones, and generally preferred to mix without wearing them, with some explaining that they couldn’t get a proper balance if they didn’t listen to the studio monitors. Often they would listen to the result of a mix with cheap shelf loudspeakers, or even car loudspeakers, claiming that those would be the most common sound sources used by the audience; strangely enough, headphones were not used for this purpose in the studio. While the association and historical overlap of stereophonic mixes, advances in studio technology and consumer audio, and the rise of psychedelia and progressive rock have been commented (more in accounts on or by individual artists/bands/producers than in general terms) the issues of binaurality, of stereophony, and of their relations with popular music has seldom been explored. The paper will focus on the musicological aspects of binaurality and stereophony, both at poiesic and aesthesic levels.

Franco opens with a history of the study of binaurality, leading us to the development of stereo audio in the 50s/60s, which provided two [and this is key to what follows] separate channels. He makes the point about the difference between binaural listening on headphones (which separates the signals completely) and binaural listening (which includes phase/delay between the signals). In the earliest experiments in binaurality, headphones were used first – and listeners considered headphones more ‘realistic’ than speaker-based stereo. Headphones were also not an option in the early days of cinema (he cites Disney’s Fantasia as one of the earliest movies with 2 channel sound)… because of the social aspect. Franco illustrates “it was difficult to kiss your loved one in the cinema wearing headphones”!
Between 1957 and the mid 1960s, studio control rooms were adapted to stereo, leading with the high-end studios in the USA. Smaller, budget studios remained mono and took some years to catch up. The principle was to establish consonance between the mixing environment and the listening one. Pop was mainly heard in mono on cheap single-speaker teenagers’ systems for pop, and in stereo on more expensive systems for adult & classical listeners. In pop, pioneers included instrumental bands like The Ventures.
Franco now leads us through the late 60s and early 70s audio technology boom – expansion of track counts, increased stereo mixing setups, cassette, 8-track, increased sales of headphones. From the 1977 [famous UK Beatles parody] Rutles’ film, he quotes Paul Simon “of course, the main thing that comes to mind about the ‘Sgt. Rutters’ album is listening on headphones to the chord that lasts forever”. Acknowledging that it’s a joke, Franco observes that his own recollection is that very few people listened to music on headphones at the time [JB note – and it’s almost impossible to listen to the original Sgt Pepper stereo mixes due to the bass being hard-panned to one side].

Listening through headphones is binaural, not stereo – because the signals are separated. Franco points out that this creates a mismatch between the mix engineer experience (i.e. using studio monitor speakers) and the 1970s listener (many of whom used headphones). A stereo creator, and a binaural listener. He further observes that there are very few 1960s/1970s photos of engineers wearing headphones when mixing. Engineers often did not like wearing headphones, due to worries about listening fatigue or even hearing loss. For many decades [and to some extent still] mixes were undertaken on the main speakers and checked on nearfield monitors. [Franco combines, here, contemporaneous research sources such as photographs, with his own memory as a recording artist at the time].
We now turn to the compromises for listeners’ stereo speakers – issues of speaker placement in the living room, noise level limitations for neighbours etc. Binaural/headphone listening takes away these practical/social listening issues. He mentions briefly the loudness war, and the ‘loudness button’ on some 1970s hi-fi systems [JB comment – it’s a good cultural/contextual point although it’s important to note that these are different types of ‘loudness’ – being connected to compression and EQ respectively – I seem to recall those loudness buttons were basically bass and treble boosts?].
Does binaural recording place the listener in the ‘wrong’ place? Franco discusses the placement of the listener’s binaural location ‘too close’to the performer – at the conductor’s podium, or at the centre of the band [depending, obviously, on mix choices]. Briefly, he now touches on the physical layout of an orchestra, noting the difference between a piano’s on-stage location (by the conductor) and its likely centre-mixed position in a stereo mix [JB note – it would have been good to touch on live orchestral M/S concert micing techniques at this point – an important tool in placing the binaural listener ‘in the auditorium’, at least for some live classical orchestral recordings]. Franco’s argument is that classical music orchestral recordings have been placing the listener in ‘unreal’ spaces [true for some, but not all recordings IMO, depending on the mixing approach used, and whether the recording was miced/mixed for a binaural listener].
We now get into pan and mixing choices of the period, and a discussion of the effect of multitrack proliferation and pan pots on late 60s/early 70s experiments with stereo/pan effects. We hear The Moody Blues “The Best Way To Travel” (1968), produced by Tony Clarke, with various tape speed, electronic feedback and pan sweep effects [very trippy].