Survival without the labels: The changing role of the recording producer #arp2015

Survival without the labels: The changing role of the recording producer. Experiences, exchanges and reflections of a veteran Tonmeister.

Abstract: In parallel with the growing digital distribution of musical content via new delivery channels over the Internet, the transformation of well­known structures for the production and dissemination of music such as the traditional record labels of past decades and the proliferation of independent labels are bringing about a shift in the way music is produced. Many productions are lead and financed by the performers themselves or by institutions of their affiliation. Acting as independent entrepreneurs, single musicians, chamber music formations, choirs, symphony orchestras and opera houses are commissioning recordings to be realized principally by producers and their recording teams. In many cases and without any increase in compensation, the producer’s competences are stretched to encompass tasks that were formerly taken care of by the label. Distribution and release are often realized online or on the artists’ own label. Alternatively a licensing contract with an existing record label may be pursued, which will lead to the recording being released exclusively online or as physical product, possibly incorporated into the label’s release catalogue.

Furthermore, the use of advanced postproduction technology is placing the recording producer in an increasingly exposed position in the creative process. Contemporary audio technology allows deeper access to the recorded performance than ever before. Sophisticated micro editing and exacting mixing and processing capabilities of powerful audio equipment and software allow extremely detailed adjustments to the audio and an unprecedented degree of influence on the recorded music. Without the control of the labels and attracted by the sophistication of the processing tools in the studio, excesses in the postproduction requests have become a real danger. In many respects recording producers would seem to be replacing the labels, as their influence and guidance of the artists in the creation of their products increases. Case studies and musical examples will be presented.

I always enjoy Martha’s presentations because she discusses production and engineering from a classical music perspective, adding breadth to ARP’s mainly pop-based field. The presentation begins with an a capella choir recording (unidentified) to demonstrate the large spaces required for classical music recording. To avoid taking too personal a perspective she has interviewed a (very exhaustive/impressive) list of producers and industry execs. The presentation is framed as a 95-year discussion from the 1920s to the present day.

We see a chart of RIAA shipments and the decline of CD (Martha has detailed access to restricted RIAA stats – here’s a similar graph that is more publicly available): 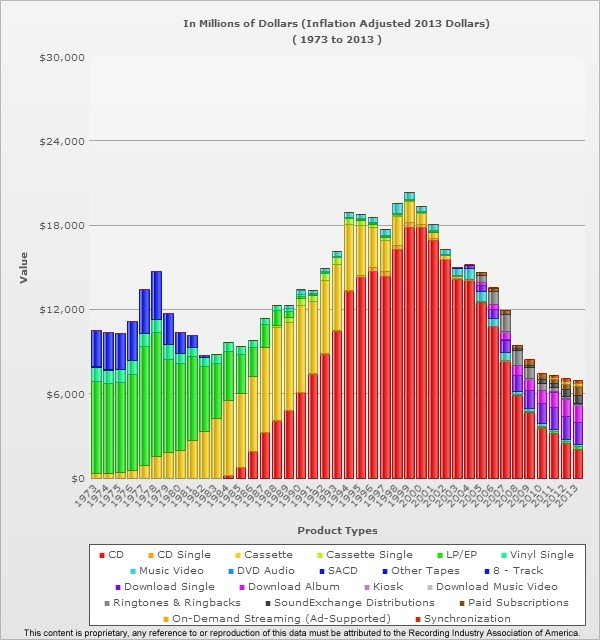 There is now a discussion of the Major Record labels, and Martha notes the incorporation of her own label, Philips Classics and also EMI, both of which are now owned by larger majors. There are too many independent labels to be counted. Larger labels are increasingly involved in distribution rather than production.

We see a comparison of 20th and 21st century industry models, noting that fewer artists are under contract, the reduction in budgets and the reduction in the number of top orchestras. The reference recordings of the 20th century are no longer made, and the labels are leaning increasingly on back catalogue. Most sales, even including CD, are now online. New online promotional platforms are noted.

Typical sales are cited – a standard classical repertoire recording in the late 20th century would sell 20,000-40,000 units. The equivalent recording now sells 4,000-5,000. Large ensembles (orchestras, opera houses, universities) are distributing their own content. As an example we see an archived webcast from McGill from The Marriage of Figaro:

Webcasting is on the increase, and it’s happening for free – Martha asks ‘where’s the money’?

For the labels, there is a challenge of an oversupply of performers looking for a label. Small independent labels are not producing less content, but the sales of the content they do produce are reduced. Musicians are often paying for their own recording costs, even when working with a label. Martha lists the needs of independent artists and their need for good quality recordings for the purposes of brand building – they need to find a team and a budget. The upside is that they own their masters. Established Tonmeisters are still in demand; organisational tasks that used to be undertaken by labels are increasingly being taken on by producers.

Depressingly but realistically, Martha observes that the new role of the recording producer involves “more work for the same or lower fees”. We are beginning to lose the ‘label sound’, but when it is required, it now resides in individuals who can produce that ‘label sound’ – so Martha personally remains in demand.

Audiences too are changing, becoming less critical – many audiences are just happy with ‘some classical music’ and favour shorter works and headphone/earbud listening.

For the next 10 years, Martha predicts the small labels and independent artists further eclipsing the historical role of the majors.

Our final example demonstrates the need for artists to undertake online promotion. We see Czardashian Rhapsody performed by Lara St John, a promotional video for a forthcoming recording release (Martha observes, dead pan, ‘we did not actually place the microphones upon the railroad track’). The video is so crowd-pleasing that it gets a round of applause from the assembled academics.