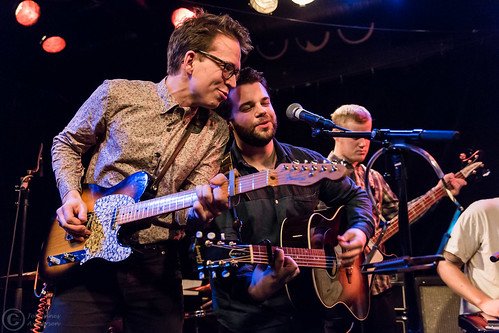 Dingus – two mixes of their song ‘Die Young’ were compared for soundbox analysis.

Abstract: In Rock: The Primary Text (2001), Allan Moore defines the sound­box as “a ’virtual textural space’, envisaged as an empty cube of finite dimensions, changing with respect to real time (almost like an abstract, three­dimensional television screen)” (2001:121). The dimensions in question refer to listeners’ perceived illusions of depth, width and height in recordings, which in turn are affected by properties such as sound level, stereo placement, reverb and frequency range. In Moore’s definition, the sound­box represents a visual metaphor for what producers and engineers would often call ‘the mix’. Why, then, should we apply the term ‘sound­box’ when ‘the mix’ seems to be an adequate term in the context of record production?

In the proposed paper I seek to extend Moore’s (2001) definition of sound­box, to also encompass record production in a practical sense. Although the sound­box is intended as a model for music analysis, I believe it can be adequate also in record production. Certain models bare certain similarities with the sound­box, and are widely used in record production, e.g. William Moylan’s sound stage (2015) and David Gibson’s three­dimensional model (1997). However, as I will argue, while these models seem to be focused on mixing, the sound­box has the potential to be a tool embracing all parts of the production process. My overall argument in this paper, then, is that practical applications of the sound­box as a tool for record production, can contribute to an increased awareness of how producers and engineers work. Thus, it is my belief that an extended definition of the sound­ box as a unity can be a good tool for working with the ‘total balance’ of a mix, in which frequency balance, stereo balance, level balance and mix density is represented.

Emil begins by outlining the theoretical framework of the soundbox. The idea arises from Allan Moore’s vertical definition of a stereo mix. He takes the position that the soundbox model can not only be a tool in music analysis, it can also be related to real-world audio engineering practice.

We hear Die Young by Dingus, which Emil produced and engineered, and different mixes (from 2014/15) are compared. The before and after, in this case, refers to Emil’s research – he implies that his attitude to mixing changed as a result of his research into using the mix as soundbox to create trans-textual references. He describes some creative mix choices (e.g. plate reverbs and the act of panning the reverb return) as a deliberate 1960s cultural reference. Other instruments are then described within the stereo image, and Erin is critical of his own mix due to its lack of trans-textual clarity. In the second, later mix, he makes more deliberate cultural references, including harder pan and less reverb on the guitar/harmonica in the intro, taking up less soundbox space, suggesting a sonic marker of loneliness.

Emil concludes by sharing his view that the soundbox principle, and using intertextual sonic allusion in mixing, can be potentially valuable to engineers/producers in envisioning a mix that fits the song better.

A questioner asks whether the established mixing term ‘sound stage’ and the academic idea of the soundbox are different things.

[JB comment] In a 20-minute presentation it is unsurprising that the discussion of the mix didn’t get into too much technical detail, but nonetheless I can’t help feeling that Moore/Dockwray’s soundbox idea is too simplistic to be usefully applied as a real world production tool. Engineers and producers deal with pan, phase, reverb ambience and EQ (and arguably compression) in making a three-dimensional stereo sound space for listeners (these create depth and width – not sure about height?). All of these technical tools can be (and are) used intertextually, but I’m not sure I can see how a theoretical framework from analysis helps to make these allusions clearer.