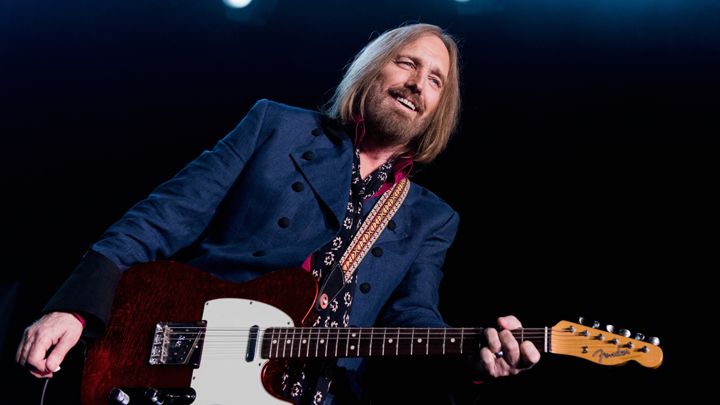 Tom Petty, one-fifth of the co-writing team behind Sam Smith’s ‘Stay With Me’.

This is a blog post about 5 bars of music. As reported in Rolling Stone and The Sun recently, the melodic similarity between Sam Smith’s 2014 song Stay With Me and Tom Petty’s I Won’t Back Down (1989) resulted in an amicable settlement between the writers and publishers sometime in 2014, resulting in Petty and Jeff Lynne, who originally wrote I Won’t Back Down, receiving a 12.5% share of the royalties. The PRS database in the UK confirms the share (members only access).
And subjectively, the songs are pretty similar, as bloggers had been pointing out since mid-2014.
[youtube=https://www.youtube.com/watch?v=qkcZV97O3pw]
But everyone was relaxed about the settlement, and Petty issued a  statement to this effect:

About the Sam Smith thing. Let me say I have never had any hard feelings toward Sam.  All my years of songwriting have shown me these things can happen.  Most times you catch it before it gets out the studio door but in this case it got by.  Sam’s people were very understanding of our predicament and we easily came to an agreement.  The word lawsuit was never even said and was never my intention.  And no more was to be said about it. How it got out to the press is beyond Sam or myself.  Sam did the right thing and I have thought no more about this.  A musical accident no more no less. In these times we live in this is hardly news. I wish Sam all the best for his ongoing career. Peace and love to all. (Petty, 2015)

Here’s the thing. Petty used the term ‘accident’, which one might interpret as meaning the copying of the melody was inadvertent. Sam Smith’s representatives claimed that the similarity was the result of a ‘coincidence’:

“Not previously familiar with the 1989 Petty/Lynne song, the writers of ‘Stay With Me’ listened to ‘I Won’t Back Down’ and acknowledged the similarity. […] Although the likeness was a complete coincidence, all involved came to an immediate and amicable agreement in which Tom Petty and Jeff Lynne are now credited as co-writers of ‘Stay With Me’ along with Sam Smith, James Napier and William Phillips.” (Kreps, 2015)

To me, that word ‘coincidence’ implies that the similarity was not a result of inadvertent copying (also known as cryptomnesia), but rather was an example of independent creation – that both songwriters separately wrote the same melody.

And if the similarity had been a genuine coincidence, there would have been no settlement, and no credit for Petty & Lynne. This is because in UK and US copyright law a work is protected by copyright if it is original and has not been copied (my emphasis below).

So if Smith’s co-writing team had genuinely independently (that is, ‘coincidentally’) recreated the 5-bar melody of the verse of IWBD, there would be no problem (and no royalties owed) because they would have created Stay With Me independently, meaning that they had not infringed Petty’s/Lynne’s copyright. Which suggests that the use of the word ‘coincidence’ might be chosen more for the press release than for the settlement.
My own view is that this is a straightforward case of cryptomnesia (that is, Smith’s writing team copied IWBD unintentionally and did not recognise their mistake until SWM was released). This is what Petty means, I suggest, when he says “these things can happen. Most times you catch it before it gets out the studio door but in this case it got by”. In my own research, almost every songwriter I have interviewed has reported the experience of accidental copying. When this happens, a co-writer or someone else on the creative team points out the similarity, the songwriter tweaks the offending passage, and the similarity disappears.

Is true independent creation possible in this case? Let’s look at the melodic content (note – this blog entry becomes fairly musicological from hereon – those who are not interested in musicology might want to skip to the last couple of paragraphs).

This is the literal transcription of Petty’s vocal.

I’ve transcribed the vocal complete with Petty’s vocal ornaments, which I think most people would agree are performance artefacts as opposed to integral to the song (that is, one might not sing them in a cover version and it would still be the same song).

And here’s Sam Smith’s vocal, again transcribed literally, including the vocal slides and bends.
In the comparison below, I’ve taken out the vocal slides and also ‘normalised’ the key – that is, both songs are shown with their ‘straight’ melodies, transposed into G major for ease of comparison (from hereon I’ll discuss everything in the same key of G for ease of reading).

Both excerpts, notated in G major (including chords), so that similarities and differences can be more clearly seen.

Now let’s look at the dissimilarities. SWM opens with a note of G which does not appear in IWBD, and the middle chord of bars 2 and 4 is a D major and a C major respectively. There are no other melodic, rhythmic or harmonic dissimilarities: every other musical event is the same.
Looking purely at IWBD, one might say that Petty and Lynne made the following creative decisions:
Each one of these decisions, on its own, is a fairly predictable and simple one that might be made by any songwriter working in a major key and using the major pentatonic scale, as lots of singers do. Indeed, most songwriters will have made every one of these choices at some time in their career. But to make ALL the same decisions and apply them in the same way?

The pitches are as follows. Both are shown in G major; the X in IWBD represents a rest which corresponds to Smith’s ‘Oh’ . That’s 10 identical pitch events, in the same order as each other.
Now, the science of melodic probability is a complicated thing and requires some very advanced maths and corpus analysis just to understand its pitch parameters (mathematically-minded musicians take a look at David Temperley‘s work on this – not for the fainthearted). And there is no equation that can accurately identify the probability of independent creation of the same melody, because there are too many subjective variables in the methodology – how would we decide the weighting of a chord choice, a rest’s value, a note’s duration, or the likelihood of a composer choosing particular pitch in relation to the previous one? And how would such likelihood change in the context of different production values or tropes within particular styles of music?
But really, even if we simplify the maths massively in SWM’s favour and apply Markov chain probability based on note-to-note pitch decisions (say, the same note, a higher note or a lower note) that’s three (pitch possibilities) to the power ten (consecutive note events). This gives a result of 59,049. In practice, this number would be much larger to allow for the possibility of intervalic leaps. If we have five note-to-note pitch possibilities (say, the same note, a higher adjacent note, a higher intervalic note, a lower adjacent note, or a lower intervalic note), that’s five (possibilities) to the power ten (consecutive note events). Which is 9,765,625.

“Damn, I HATE working out melodic probability in my head…”

Does this mean the odds of any two ten-note melodies being coincidentally identical to each other are more than 9 million to one against? No. Firstly, composers don’t compose one note at a time (so probability itself changes with every event), but more importantly, because melody is not just about pitch – it includes rhythmic values and note durations too. So whenever a composer chooses a pitch, they are also choosing where in the bar to place that pitch – and how long the note should last. So for every pitch choice there are several different rhythmic options.
And now to chords. If you’re writing a simple song on the guitar, and you’re in in G major, you might well choose a G or an E minor as the chord to strum over your simple pentatonic melody. A simple choice, and a predictable one in both cases, but a choice nonetheless. And this choice is made contextually of the melodic pitch and rhythmic choices, intertwined with them of course, but not dictated by them. So the likelihood of similarity through coincidence reduces even further.

Our hypothetical ‘theory of everything’ melodic probability equation (if anyone ever finds it) would have to incorporate pitch, rhythm, note duration and harmony, and would likely need to be based on an agreed ‘big data’ analysis of all melodies that there have ever been. But whichever way you look at it, in a ten-note melody, the likelihood of all these choices being the same through ‘coincidence’ is clearly infinitesimally small.

But there are only seven notes in the octave, right? Surely people are bound to write the same tune as each other – there are only so many choices.
(Bloggers and commenters, 2015 and earlier)

For anyone who still thinks that independent melodic creation is possible, I’d suggest you try out the above ‘blogger’s theory’ and see if you can find any examples. Try to find ANY melody that has ten consecutive (different) pitches that are the same as any other melody. If you do find one (I’ve yet to do so) see if the rhythms of the notes are similar. For a starting point, try searching for any 10-note melody in Barlow and Morganstern’s famous dictionary of musical themes.
In the case of Smith/Petty et al, everyone did the right thing and the similarity was acknowledged. All good.
Accidental copying? Probably. Coincidence? Impossible.
——–
Disclosure: I am commenting on the Smith/Petty comparison independently, as an interested musician & blogger, and have no connection to any of the parties involved.