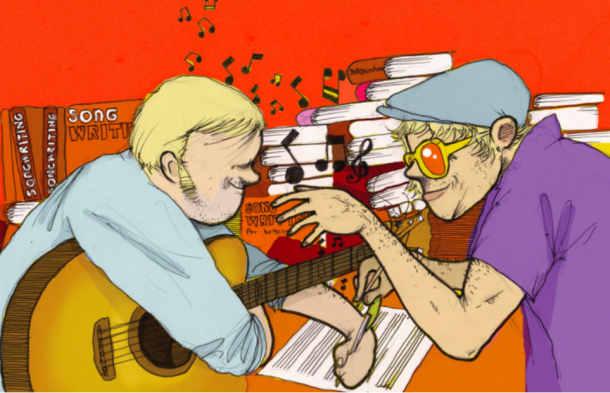 This article originally appeared in Total Guitar magazine issue 229. Reproduced by permission. Words: Joe Bennett. Illustration: Andy Watt. Click the image to download a pdf.
—
There are very few jobs where you promise to give away half your wages before you get to work, but this is what happens when two or more people decide to write a song together. And they do it with good reason; did you know that almost half the number of chart-topping hits in the USA since 1955 were written by more than one person? But if collaboration is clearly an effective way of writing a song, how is it done? How do two brains work together to produce something truly great?
The first step in co-writing is obviously to find a partner. As with any other musical activity, we learn faster if the other person has more experience than ourselves, and finding strong co-writers isn’t always difficult. A lot of successful writers are quite happy to work with new and upcoming talent. If you’re an experienced songwriter yourself you’ll probably already know that the ‘fresh ears’ that a new collaborator brings can take your tried and tested methods in exciting new directions.
So you’re in the room together, probably with a couple of guitars, and your eyes meet. There’s an uncomfortable pause and no-one quite knows what to say or play. Breaking the ice can be difficult, so one way to avoid a long, slow thaw is to bring some pre-prepared ideas to the session. These can be anything – a few chords, a fragment of melody, a riff, an interesting lyric phrase, a news story or even a photograph. They may not necessarily end up in the finished song, but they will always function as a springboard to other ideas. If both writers do their prep in this way, you’ll be able to start work immediately.
Not every creative idea will be right for the song. And you’ll both need to negotiate – either to defend your own ideas or to suggest changes to those provided by the other. The temptation here is always to fight for your own material. After all, you thought it was good enough to suggest, so it’s all too easy to become defensive if your co-writer isn’t impressed. The best way over this hurdle is to work additively rather than subtractively. If the co-writer comes up with a riff that doesn’t sound quite right, it’s better to come up with an alternative than to just reject it. By keeping this positive spirit going in the room, ideas will keep coming thick and fast, and the partnership can simply select the best as they fly by.
But even if the room is constantly filled with musical ideas, you’ll often have to pause to check you agree on the game plan. Writing a song forces decision-making; the partnership needs to agree on subject matter, title, form and structure, rhyme scheme, and of course the melody, chords and lyric. Here, the watchword is humility. You and your co-writer might be strong-minded creative people, but the song is bigger than either of you. If you really care about it you’ll both know when to back down in the face of a great idea.
Of course, the two-guitars-locked-room method is only one way of collaborating. Some artists write using full band rehearsal room sessions (U2); others don’t even need to meet (Elton John/Bernie Taupin). In recent years many songwriters have begun to collaborate using the Internet; we can now share live lyric documents, audio files or even complete studio sessions online.
Whatever method you use, the flow of creativity won’t be constant; there will be times when it just isn’t working, and everybody feels like the song’s running out of steam. Here, as with solo songwriting, it can help to try a different approach. Introduce a new idea, such as a drum loop, crazy tuning, tempo change or capo. Going back a few steps can help to break the logjam; even overturning big early-days decisions such as the title, concept or song form can sometimes speed you towards the completion of the song. If you’re really stuck, taking a quick break can sometimes help the collective subconscious to find the answer to the puzzle, so if all else fails make some tea.
Co-writing gets easier with practice, and if you’re new to it you may end up collaborating with several different people before finding a partnership that works for you. Then if your song turns out great you won’t resent halving that wage-packet. A bird in the hand is better than having a hand in a turkey.