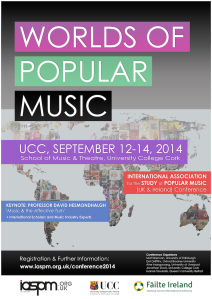 IASPM 2014 conference poster
I’m en route to the UK & Ireland IASPM conference in Cork. I was at the International one in Spain last year – the branch and International IASPM conferences leapfrog each other every other year, so for 2014 we’re back in our respective countries. I’ve submitted an abstract for the 2015 conference in Sao Paulo, Brazil (about chord loops in the Eurovision Song Contest – regular readers will know this is an interest). Waiting to hear if it gets through peer review.
So here’s my abstract for the forthcoming conference. This is part of a panel about similar themes — other presenters are Holly Holmes (Chester), Dan McKinna (BIMM) and Marcus O’Dair (Middlesex).
As always I’ll live-blog from the conference where possible.

Songs lie at the centre of popular music’s Intellectual Property framework. They represent the starting point for the industry’s two most important creative products: the live performance or the recorded audio artefact. In the early 20th century, US and European copyright conventions were established whereby two separate objects could be ‘owned’: the song and the sound recording, the latter being a derivative work of the former. This state of affairs, where ‘song’ and ‘track’ are separate copyrights, remains at the industry’s administrative core, and has led to awareness among creators of the economic benefits of ‘keeping a slice of the publishing’.
However, in real-world songwriting and production situations it is not always easy to ascertain who contributed to ‘writing the song’ and who acted as an arranger, performer or producer. Inferring creative contributions from the audio artefact itself is fraught with methodological challenges; from a listener’s point of view, there is no experiential distinction between song and track. Drawing on the theoretical work of Moore, McIntyre and Csikszentmihalyi2, together with interviews with professional songwriters and the author’s own experience as a songwriter and expert witness forensic musicologist, this paper argues that the artificial administrative distinction between ‘song’ and ‘track’ is simultaneously a constraint upon creators and a silent driver of creative practice itself.