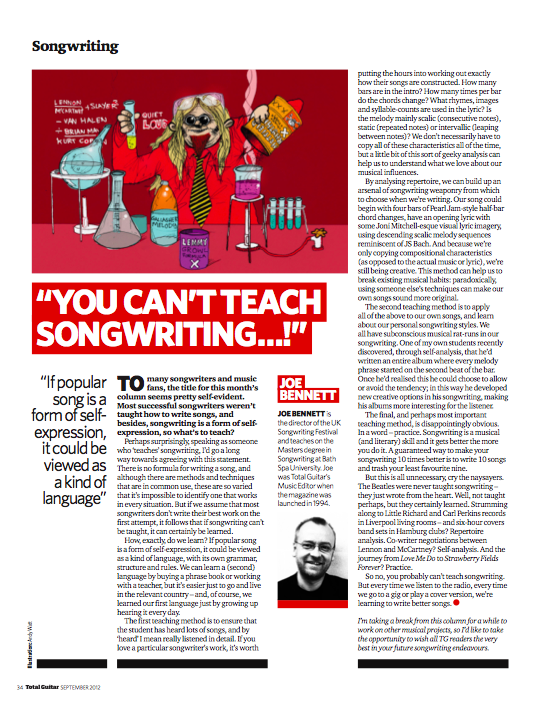 To many songwriters and music fans, the title above seems pretty self-evident. Most successful songwriters weren’t taught how to write songs, and besides, songwriting is a form of self-expression, so what’s to teach?
Perhaps surprisingly, speaking as someone who ‘teaches’ songwriting, I’d go a long way towards agreeing with this statement. There is no formula for writing a song, and although there are methods and techniques that are in common use, these are so varied that it’s impossible to identify one that works in every situation. But if we assume that most songwriters don’t write their best work on the first attempt, it follows that if songwriting can’t be taught, it can certainly be learnt.
How, exactly, do we learn? If popular song is a form of self-expression, it could be viewed as a kind of language, with its own grammar, structure and rules. We can learn a (second) language by buying a phrase book or working with a teacher, but it’s easier just to go and live in the relevant country – and of course we learned our first language just by growing up hearing it every day.
The first teaching method is to ensure that the student has heard lots of songs, and by ‘heard’ I mean really listened in detail. If you love a particular songwriter’s work, it’s worth putting the hours into working out exactly how their songs are constructed. How many bars are in the intro? How many times per bar do the chords change? What rhymes, images and syllable-counts are used in the lyric? Is the melody mainly scalic (consecutive notes), static (repeated notes) or intervallic (leaping between notes)? We don’t necessarily have to copy all of these characteristics all of the time, but a little bit of this sort of geeky analysis can help us to understand what we love about our musical influences. By analysing repertoire, we can build up an arsenal of songwriting weaponry from which to choose when we’re writing. Our song could begin with four bars of Pearl Jam-style half-bar chord changes, have an opening lyric with some Joni Mitchell-esque visual lyric imagery, using descending scalic melody sequences reminiscent of JS Bach. And because we’re only copying compositional characteristics (as opposed to the actual music or lyric) we’re still being creative. This method can help us to break existing musical habits: paradoxically, using someone else’s techniques can make our own songs sound more original. 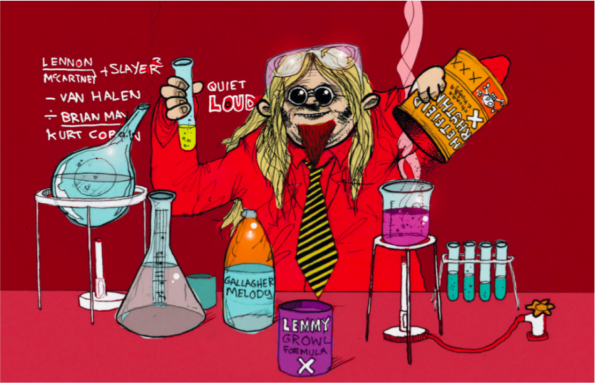 The second teaching method is to apply all of the above to our own songs, and learn about our personal songwriting styles. We all have subconscious musical rat-runs in our songwriting. One of my own students recently discovered, through self-analysis, that he’d written an entire album where every melody phrase started on the second beat of the bar. Once he’d realised this he could choose to allow or avoid the tendency; in this way he developed new creative options in his songwriting, making his albums more interesting for the listener.
The final, and perhaps most important teaching method, is disappointingly obvious. In a word – practice. Songwriting is a musical (and literary) skill and it gets better the more you do it. A guaranteed way to make your songwriting ten times better is to write ten songs and trash your least favourite nine.
But this is all unnecessary, cry the naysayers. The Beatles were never taught songwriting – they just wrote from the heart. Well, not taught perhaps, but they certainly learned. Strumming along to Little Richard and Carl Perkins records in Liverpool living rooms – and six-hour covers band sets in Hamburg clubs? Repertoire analysis. Co-writer negotiations between Lennon and McCartney? Self-analysis. And the journey from ‘Love Me Do’ to ‘Strawberry Fields Forever’? Practice.
So no, you probably can’t teach songwriting. But every time we listen to the radio, go to a gig or play a cover version, we’re learning to write better songs.