The Song Remains The Same – Why? (from Total Guitar Magazine) 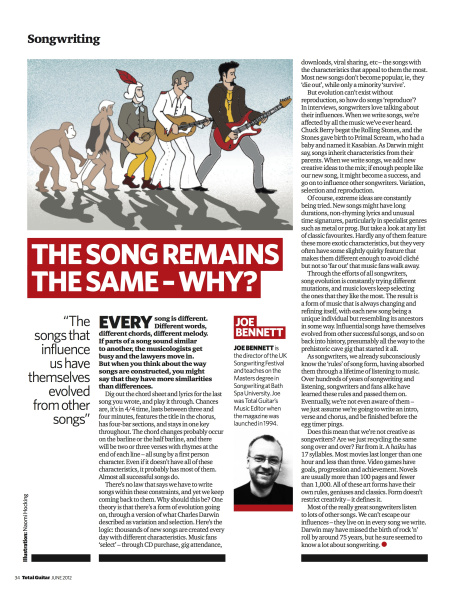 Every song is different. Different words, different chords, different melody. If parts of a song sound similar to another, the musicologists get busy and the lawyers move in. But when you think about the way songs are constructed, you might say that they have more similarities than differences.
Dig out the chord sheet and lyrics for the last song you wrote, and play it through. Chances are, it’s in 4/4 time, lasts between three and four minutes, features the title in the chorus, has 4-bar sections, and stays in one key throughout. The chord changes probably occur on the barline or the half barline, and there will be two or three verses with rhymes at the end of each line – all sung by a first person character. Even if it doesn’t have all of these characteristics, it probably has most of them. Almost all successful songs do.
There’s no law that says we have to write songs within these constraints, and yet we keep coming back to them. Why should this be? One theory is that there’s a form of evolution going on, through a version of what Charles Darwin described as variation and selection. The logic goes like this: thousands of new songs are created every day with different characteristics. Music fans ‘select’ – through CD purchase, gig attendance, downloads, viral sharing etc – the songs with the characteristics that appeal to them the most. Most new songs don’t become popular, ie, they ‘die out’, while only a minority ‘survive’.
But evolution can’t exist without reproduction, so how do songs ‘reproduce’? In interviews, songwriters love talking about their influences. When we write songs, we’re affected by all the music we’ve ever heard. Chuck Berry begat the Rolling Stones, and the Stones gave birth to Primal Scream, who had a baby and named it Kasabian. As Darwin might say, songs inherit characteristics from their parents. When we write songs, we add new creative ideas to the mix; if enough people like our new song, it might become a success, and go on to influence other songwriters. Variation, selection and reproduction.
Of course, extreme ideas are constantly being tried. New songs might have long durations, non-rhyming lyrics and unusual time signatures, particularly in specialist genres such as metal or prog. But take a look at any list of classic favourites. Hardly any of them feature these more exotic characteristics, but they very often have some slightly quirky feature that makes them different enough to avoid cliché but not so ‘far out’ that music fans walk away.
Through the efforts of all songwriters, song evolution is constantly trying different mutations, and music lovers keep selecting the ones that they like the most. The result is a form of music that is always changing and refining itself, with each new song being a unique individual but resembling its ancestors in some way. Influential songs have themselves evolved from other successful songs, and so on back into history, presumably all the way to the prehistoric cave gig that started it all. 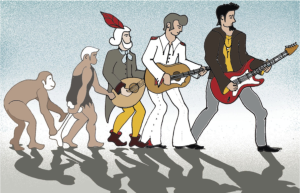 As songwriters, we already subconsciously know the ‘rules’ of song form, having absorbed them through a lifetime of listening to music. Over hundreds of years of songwriting and listening, songwriters and fans alike have learned these rules and passed them on. Eventually we’re not even aware of them – we just assume we’re going to write an intro, verse and chorus, and be finished before the egg timer pings.
Does this mean that we’re not creative as songwriters? Are we just recycling the same song over and over? Far from it. A haiku has seventeen syllables. Most movies last longer than one hour and less than three. Video games have goals, progression and achievement. Novels are usually more than 100 pages and fewer than 1000. All of these art forms have their own rules, geniuses and classics. Form doesn’t restrict creativity – it defines it.
Most of the really great songwriters listen to lots of other songs. We can’t escape our influences – they live on in every song we write. Darwin may have missed the birth of rock ‘n’ roll by around 75 years, but he sure seemed to know a lot about songwriting.