Don't Bore Us – Write a Chorus (Techniques for Songwriters) 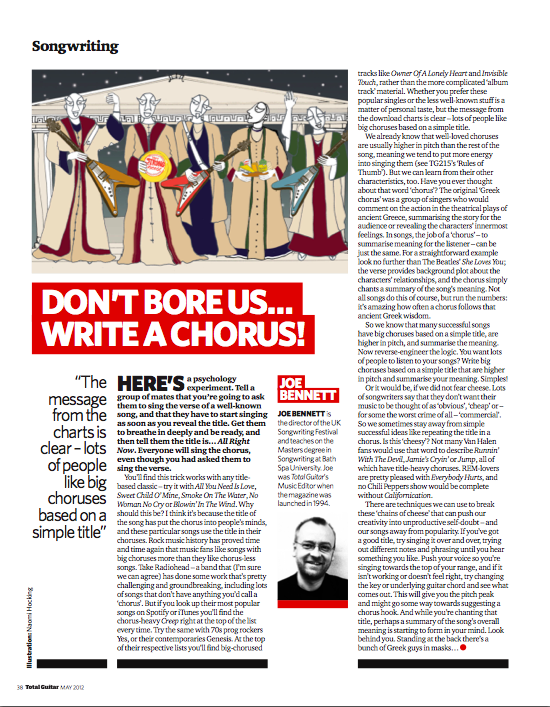 Here’s a psychology experiment. Tell a group of mates that you’re going to ask them to sing the verse of a well-known song, and that they have to start singing as soon as you reveal the title. Get them to breathe in deeply and be ready, and then tell them the title is… All Right Now. Everyone will sing the chorus, even though you had asked them to sing the verse.
You’ll find this trick works with any title-based classic – try it with All You Need Is Love, Sweet Child of Mine, Smoke On The Water, No Woman No Cry or Blowin’ in the Wind. Why should this be? I think it’s because the title of the song has put the chorus into people’s minds, and these particular songs use the title in their choruses. Rock music history has proved time and time again that music fans like songs with big choruses more than they like chorus-less songs. Take Radiohead – a band that (I’m sure we can agree) has done some work that’s pretty challenging and ground-breaking, including lots of songs that don’t have anything you’d call a ‘chorus’. But if you look up their most popular songs on Spotify or iTunes you’ll find the chorus-heavy Creep right at the top of the list every time. Try the same with 1970s prog rockers Yes, or their contemporaries Genesis. At the top of their respective lists you’ll always find big-chorused tracks such as Owner of A Lonely Heart and Invisible Touch rather than the more complicated ‘album track’ material. Whether you prefer these popular singles or the less well-known stuff is a matter of personal taste, but the message from the download charts is clear – lots of people like big choruses based on a simple title.
We already know that well-loved choruses are usually higher in pitch than the rest of the song, meaning we tend to put more energy into singing them (see TG215’s ‘Rules of Thumb’). But we can learn from their other characteristics too. Have you ever thought about that word ‘chorus’? The original ‘Greek chorus’ was a group of singers who would comment on the action in the theatrical plays of ancient Greece, summarising the story for the audience or revealing the characters’ innermost feelings. In songs, the job of a ‘chorus’ – to summarise meaning for the listener – can be just the same. For a straightforward example look no further than The Beatles’ She Loves You; the verse provides background plot about the characters’ relationships, and the chorus simply chants a summary of the song’s meaning. Not all songs do this of course, but run the numbers: it’s amazing how often a chorus follows that ancient Greek wisdom. 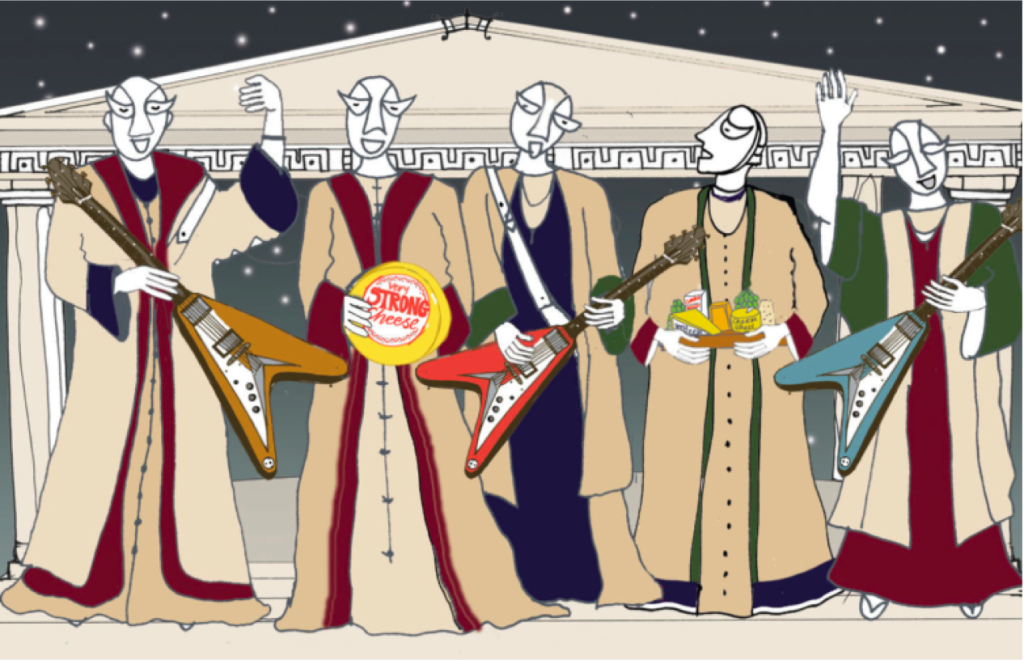 So we know that many successful songs have big choruses based on a simple title, are higher in pitch, and summarise the meaning. Now reverse-engineer the logic. You want lots of people to listen to your songs? Write big choruses based on a simple title that are higher in pitch and summarise your meaning. Simples!
Or it would be, if we did not fear cheese. Lots of songwriters say that they don’t want their music to be thought of as ‘obvious’, ‘cheap’ or  – for some the worst crime of all – ‘commercial’. So we sometimes stay away from simple successful ideas like repeating the title in a chorus. Is this ‘cheesy’? Not many Van Halen fans would use that word to describe Runnin’ With The Devil, Jamie’s Cryin’ or Jump, all of which have title-heavy choruses. REM-lovers are pretty pleased with Everybody Hurts, and no Chili Peppers show would be complete without Californication.
There are techniques we can use to break these ‘chains of cheese’ that can push our creativity into unproductive self-doubt – and our songs away from popularity. If you’ve got a good title, try singing it over and over, trying out different notes and phrasing until you hear something you like. Push your voice so you’re singing towards the top of your range, and if it isn’t working or doesn’t feel right, try changing the key or underlying guitar chord and see what comes out. This will give you the pitch peak and might go some way towards suggesting a chorus hook. And while you’re chanting that title, perhaps a summary of the song’s overall meaning is starting to form in your mind. Look behind you. Standing at the back there’s a bunch of Greek guys in masks…