All You Gotta Do Is Sing – lyric processes in songwriting 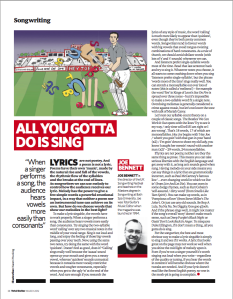 Lyrics are not poetry. And a poem is not a lyric. Poems have their own ‘music’, made by the natural rise and fall of the vowels, the rhythmic flow of the syllables and the breaks at the end of lines. As songwriters we can use melody to control how the audience receives our lyric. Melody has the power to give a few simple words a powerful emotional impact, in a way that neither a poem or an instrumental tune can achieve on its own. But how do we choose words that show our melodies in the best light?
To make a lyric singable, the vowels have to work properly. When a singer performs a song, the audience hears vowels more easily than consonants. Try singing the two-syllable word ‘calling’ over any two musical notes in the middle of your vocal range. Sing it out loud and long, and enjoy the feeling of those big vowels passing over your teeth. Now, using the same two notes, try doing the same with the word ‘quickest’. Doesn’t feel as good, does it? ‘Calling’ sings really well because the ‘aaaaa’ sound opens up your mouth and gives you a meaty vowel, whereas ‘quickest’ sounds unmusical because it contains more vocally restrictive vowels and tougher consonants, especially when you get to the ugly ‘st’ at the end of the word. And sure enough if you research the lyrics of any style of music, the word ‘calling’ is much more likely to appear than ‘quickest’, even though they’re both pretty common words. Songwriters tend to favour words with big vowels that avoid tongue-twisting combinations of hard consonants. As a rule of thumb, we should avoid sibilant words (with lots of ‘s’ and ‘t’ sounds) whenever we can.
And listeners prefer single-syllable words most of the time. Read that last sentence back and try to sing it. Whatever notes you choose, it all starts to come crashing down when you sing ‘listeners prefer single-syllable’, but the phrase ‘words most of the time’ sings really well. You can stretch a monosyllable out over lots of notes (this is called a ‘melisma’) – for example the word ‘fire’ in Kings of Leon’s Sex on Fire is spread over three notes – but it’s impossible to make a two-syllable word fit a single note. Overdoing melismas when they’re not needed is generally considered a crime against music, but let’s not lower the tone with talk of Mariah Carey. 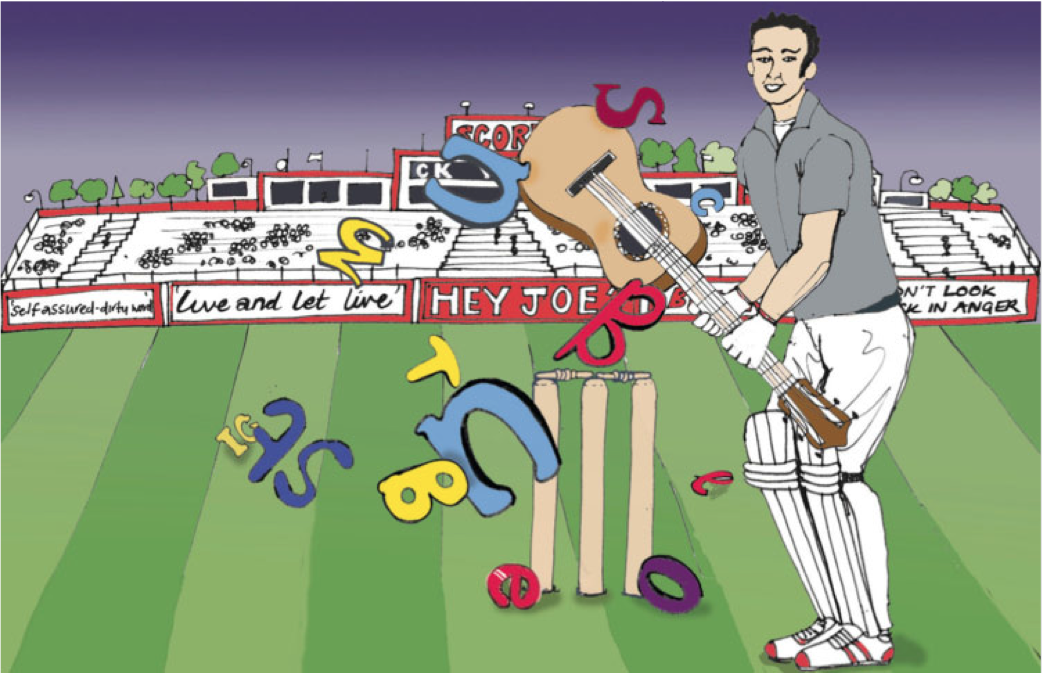 Let’s test our syllable-count theory on a couple of classic songs. The Beatles’ We Can Work it Out opens with the lines ‘Try to see it my way / only time will tell if I am right or I am wrong’. That’s 18 words, 17 of which are monosyllables. Hey Joe begins with ‘Hey Joe / where you goin’ with that gun in your hand (x2) / I’m goin’ down to shoot my old lady, you know I caught her messin’ round with another man (x2)’ – 39 words, 34 monosyllables.
If lyrics are not poetry, neither are they the same thing as prose. This means you can take serious liberties with the English language and get away with it, as long as it sounds good when sung. Having melody on your side means you can say things in a lyric that are grammatically incorrect, such as Paul McCartney’s famous line “…ever-changing world in which we live in” (from Live and Let Die). You can cram in some dodgy rhymes, such as Kurt Cobain’s ‘self-assured / dirty word’ (from Smells Like Teen Spirit).You can make up words, as in ‘Pompitous of love’ (from Steve Miller’s The Joker). Or just use any old sounds. Be Bop A Lula. Na Na Na. No Diggity. Goo goo g’joob. And if the phrase sings well, it might notmatter if the song’s overall ‘story’ doesn’t make much sense, such as Deep Purple’s Black Night or Oasis’ Don’t Look Back In Anger. To misquote Duke Ellington, if it don’t mean a thing, all you gotta do is sing.
For the songwriter, the best and most obvious way to make a lyric singable is simply to sing it and see if it works. A lyric that looks great on the page may not work so well when you shine the cold light of melody upon it. Even if you’re not a singer yourself it’s worth singing out loud when you write – regardless of the quality or tuning, if you hear the words in context it’ll become obvious where the tweaks are needed. And if your lyric doesn’t read like the finest English poetry, no-one in the mosh-pit is going to complain.