Song vs Track – the Picture and the Frame 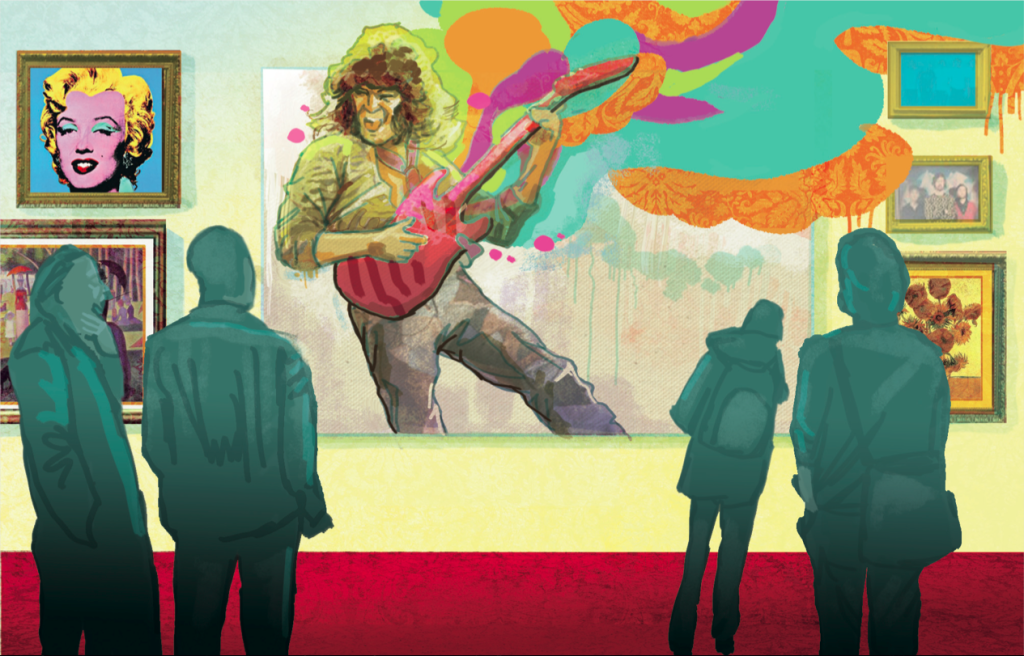 Do you have a favourite song? Do you know why you like it? We all have favourite tracks, of course, but if someone asks us why we like a particular song – that is, the words, melody and chords – we find it difficult to give an answer. Often we’ll talk about where we were when we heard the track: going to school, falling in love, going on holiday, passing an exam or getting a new job. And tracks are great for evoking these memories. But tracks and songs are not the same thing.
To illustrate, let’s take a look at Van Halen’s 1978 cover version of Ray Davies’ 1964 rock classic You Really Got Me. The Kinks’ original, produced by Shel Talmy, is archetypal 60s garage-rock, with lo-fi production values, ‘mushy’ hi-hat and punk-attitude pentatonic guitar solo. 14 years later, and producer Ted Templeman throws the proverbial kitchen sink at VH’s debut single – guitars, bass and drums are heavily compressed, vocals are multi-tracked and of course EVH’s then-innovative guitar playing is very much to the fore. They’re both great rock tracks with wonderful performances, but they sound very different, partly because of the time they were recorded. But the song remains almost identical between the two versions. Try singing a bit of You Really Got Me to yourself now – just unaccompanied, without the guitar. Your version would be equally recognisable to a Kinks or a Van Halen fan, even if they’d never heard the other band’s version. Every track is a particular song. But not every song is a particular track.
In copyright law, tracks and songs are completely separate, and are usually owned by different companies (the record company and publisher respectively). So if you play an Oasis song at a gig, songwriting royalties will find their way to Noel Gallagher as the composer, not to you as the performer – even if you happen to be a member of Oasis. This, incidentally, is why Noel is considerably richer than his brother.
But music fans don’t care about this separation – they hear song and track simultaneously. To see this in action, just play one of your own songs to some guitar-playing friends and ask them what they think of it. If you perform it on an acoustic guitar, they’ll comment on your strumming/picking technique, or perhaps your vocal. They’ll highlight ‘good bits’ such as the intro riff or the voicing of a particular chord. If you play them a demo, they’ll tell you what they think of your guitar sound, and pick up aspects of your production such as backing vocals. But you’ll hardly ever get a reference to your song – the particular combination of words, chords and melodic pitches that you’ve created using what some lawyers call ‘the sweat of the brow’.
Why should this be? I think it’s because production, arrangement and performance – the elements that are present in the track but not in the song – are more immediate. Our brains appreciate a passionate vocal, a powerful snare drum sound or soaring string bend much more quickly than they can process a melodic shape, lyric concept or chord inversion.
I sometimes use the analogy of a picture in a frame – the image on the canvas is the same regardless, but without the frame, the picture looks somehow unfinished when you hang it on the wall. And songs do need tracks in order to communicate. A parallel here would perhaps be in film-making; if you go to see a movie you need it to have a well-written script, but you wouldn’t dream of sitting down with the script on its own and imagining all those actors, sets and CGI space-monsters. Not unless you’re a serious movie geek, anyway.
So if audiences don’t separate the song from the track, what does this mean for us as songwriters? It means we need to make great-sounding demos, with strong vocals and decent production values. It means that when we perform a song live, we need to create an arrangement that’s interesting for an audience, and we need an outstanding singer to communicate our emotional ideas. Our songs are our children. We have a duty to send them out into the world wearing decent clothes.