This article originally appeared in Total Guitar magazine issue 217, August 2011. Reproduced by permission. Words: Joe Bennett. Illustration: Christian Ward. Click the image on the right to download a pdf of the article. 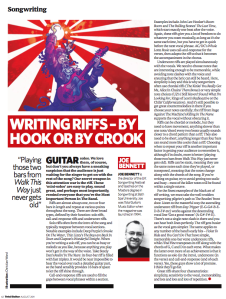 Guitar solos. We love them, of course, but don’t you always have a sneaking suspicion that the audience is just waiting for the singer to get on with the rest of the song? Our secret weapon in this attention war is the riff. These ‘mini-solos’ are easy to play, sound great, and perhaps most importantly, remind everyone that you’re the Most Important Person In The Band.
Riffs are almost always one, two or four bars in length and repeat at various points throughout the song. There are three broad types, defined by their function: solo riffs, call-and-response riffs and underscore riffs.
Solo riffs often form the intro of the song and typically reappear between vocal sections. Notable examples include Deep Purple’s Smoke On The Water, Thin Lizzy’s The Boys are Back In Town and Clapton’s Wonderful Tonight. When you’re writing a solo riff, you can be as busy or melodic as you like, because anything you play won’t get in the way of the voice. Take Steely Dan’s Reelin’ In The Years: its four-bar riff is filled with fast triplets. It would be near impossible to hear the vocal over such a detailed guitar part, so the band sensibly provides 16 bars of space to let the riff shine through.
Call-and-response riffs are used to fill the gaps between vocal phrases within a section.  Examples include John Lee Hooker’s Boom Boom and The Rolling Stones’ The Last Time, which start exactly one beat after the voice. Again, these riffs give you a lot of freedom to do whatever you want musically, as long as it’s the same each time, but you have to get in quick before the next vocal phrase. AC/DC’s Whole Lotta Rosie uses call-and-response for the verses, then adapts the riff so that it becomes the accompaniment in the chorus. 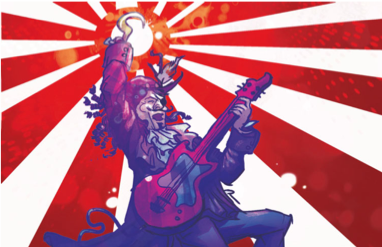 Underscore riffs are played simultaneously with the vocals. We need to choose notes that are interesting enough to be memorable, while avoiding note clashes with the voice and ensuring that the lyric can still be heard. Here, simplicity is key and this is why songwriters often use chordal riffs (The Kinks’ You Really Got Me, Alice In Chains’ Them Bones) or very simple note choices (U2’s I Still Haven’t Found What I’m Looking For, Kings of Leon’s Radioactive or the Chilis’ Californication). And it’s still possible to get great countermelodies in there if you choose your notes carefully; the riff from Rage Against The Machine’s Killing In The Name supports the vocal without obscuring it.
Riffs can be chordal or melodic, but they need to have movement; anything slower than one note/chord every two beats usually sounds closer to a chord pattern than a riff. They also need to be short; anything longer than four bars can sound more like a solo than a riff. Choosing when to repeat your riff is another important factor in getting your audience to remember it, although if in doubt, more is better (playing those two bars from Walk This Way just never gets old). Riffs can be static, meaning they use the same notes each time they’re played, or transposed, meaning that the notes change along with the chords of the song. If you’re writing on guitar, try to avoid getting too scalic and busy – most of the killer notes will be found within a single octave.
For the finest examples of the black art of riff writing, we must take the well-trodden songwriting pilgrim’s path to The Beatles’ front door. Listen to the masterful way the ascending underscore riff from Day Tripper (E-G-G#-B-E- D-B-F# etc) works against the descending vocal line ‘Got a good reason’ (A-G#-F#-E). There’s not a single note clash in there and you can hear both lines perfectly. The riff gets busier as the vocal gets simpler. The same applies to any number of the band’s early hits – Ticket To Ride and You Can’t Do That have simple, memorable one-bar verse underscore riffs, while I Feel Fine transposes its riff along with the chords of G, C and D in each verse. What makes the latter even more of an achievement is that it functions as solo (in the intro), underscore (in the verse) and call-and-response (end of each verse). Yes, these guys show a lot of promise. I think they’ll go far.
Great riffs share four characteristics: simplicity, sensitivity to the vocal, memorability, and lots and lots and lots of repetition.