This article originally appeared in Total Guitar magazine issue 216, July 2011. Reproduced by permission. Words: Joe Bennett. Illustration: Christian Ward. Click the image to download a pdf.
If you build it, they will come 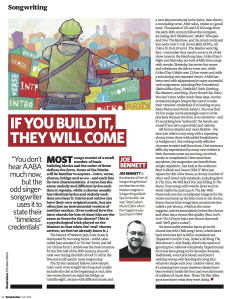 Most songs consist of a small number of basic building blocks, and the order of these defines the form. Some of the blocks themselves will be familiar to any music fan – intro, verse, chorus, bridge and so on, and each has its own particular characteristics.To state the obvious, a verse has the same melody and different lyrics each time it repeats; a chorus usually has identical lyrics and melody each time you hear it. Intros and outros can have their own original music, but are often just an instrumental version of another section (ever noticed how the intro chords for lots of chart hits are the same as those for the chorus? This is a psychological trick played on the listener so that when the ‘real’ chorus arrives, we feel like we already know it).

The history of Western pop/rock music is dominated by two song forms – AABA (also called ‘jazz standard’ or ’32-bar’ form) and AB (also called ‘chorus form’). AABA was the most common for the first half of the 20th century; AB took over during the birth of rock ‘n’ roll in the 1950s, and is still used in most of the songs we hear today.
The 32-bar standard follows a few simple rules; each verse is 8 bars long and usually includes the title at the beginning or end; after two verses there’s an 8-bar bridge (‘middle 8’) section with different music and a new idea introduced in the lyric; then there’s a final concluding verse. After solos, repeat according to (good) taste. Literally thousands of UK and US hit songs from the early 20th century follow this template, including Ain’t Misbehavin’, Makin’ Whoopee, I Got Rhythm and Over The Rainbow, and the trend continued into early rock ‘n’ roll (Great Balls of Fire, All I Have To Do Is Dream). The Beatles were big fans – remember that they used to cover a lot of old show tunes in the Hamburg days. A Hard Day’s Night and Yesterday are both AABA form songs with tweaks (Yesterday has 7-bar verses and substitutes the title in verse 2; A Hard Day’s Night uses 12-bar verses and adds a solo during one repeated verse). AABA has been used with adaptations by many of rock’s most successful songwriters, including Pete Townshend (Behind Blue Eyes), Hetfield/Ulrich (Nothing Else Matters) and Sting (Every Breath You Take). You don’t hear AABA much these days, although the occasional singer-songwriter uses it to state their ‘timeless’ credentials (I’m looking at you, Katie Melua and Norah Jones!). You may find that 32-bar songs can be pleasingly easy to write, precisely because the form is so restrictive – and it’s surprising how ‘authentic’ the results can sound if you have a good title and melody. 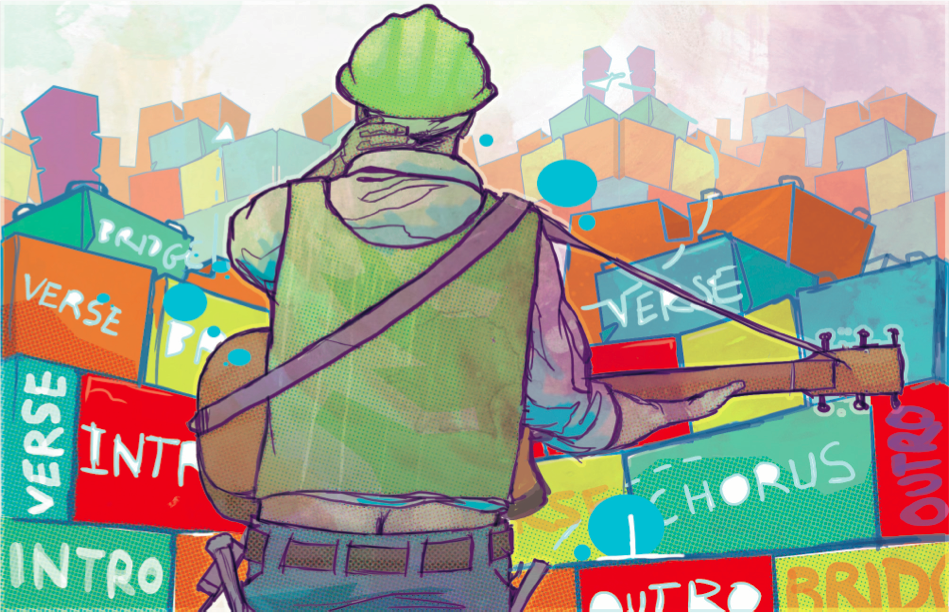 Illustration – Christian Ward
AB form is simpler and more flexible – the term just refers to any song with a repeating chorus (even those with added breakdowns or bridges etc). But writing really effective choruses is easier said than done. One common difficulty experienced by many new songwriters is that their choruses come out too long, involved, wordy or complicated. Here, more than anywhere, the songwriter can benefit from simple repetition. Just look at the evidence – Back in Black and Sweet Child Of Mine just repeat the title a few times – as do any number of other well-loved rock standards, including Born In The USA, Knockin’ on Heaven’s Door, We Will Rock You and Killing In The Name. Even weirdo lyrics like Hotel California and Lucy In The Sky With Diamonds save the complicated imagery for the verses and ramp up the title-count in the chorus. Some chorus-form songs have an extra section called a pre-chorus, which as the name suggests, arrives immediately before the chorus, and often has a chorus-like quality itself (e.g. Bon Jovi’s Livin’ on a Prayer has a pre-chorus ending with the lyric ‘We’ll give it a shot’).
An honourable mention has to go to the chorus-less AAA (folk song) form, which dates back centuries and is still in very occasional use (Squeeze’s Cool for Cats, Dylan’s All Along The Watchtower). And finally, of course, there’s the option of ignoring the rulebook completely. Experimental form has been going on for decades (Genesis, Radiohead, even Girls Aloud), and there is of course nothing wrong with bending the song into whatever shape suits your creative vision. But it’s amazing how many timeless classics have been written ‘inside the box’ and won the hearts of millions of music fans. Those Tin Pan Alley guys sure knew what they were doing.