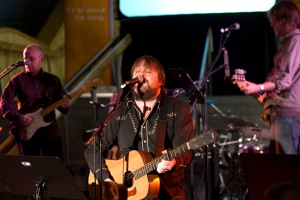 The sound of Burns filled the Parliament’s Garden Lobby as the ten finalists of the Burnsong song contest play a showcase concert hosted by the Presiding Officer, Alex Fergusson MSP.

Andy Tucker from Edinburgh performs his song “Spielberg Moon”.
Andy Tucker, from Edinburgh but now living in Peebles, one of the ten finalists in the Burnsong competition and week-long workshop said:

“It’s been such a privilege to sit and listen to these musicians all day and night, all of this week – I don’t want to go back to real life. The Scottish Parliament is so unlike any other venue I played before. It sounds great, it’s a once in a lifetime chance and a great end to the week.”